Richard Carapaz puts on the pink jersey in Turin 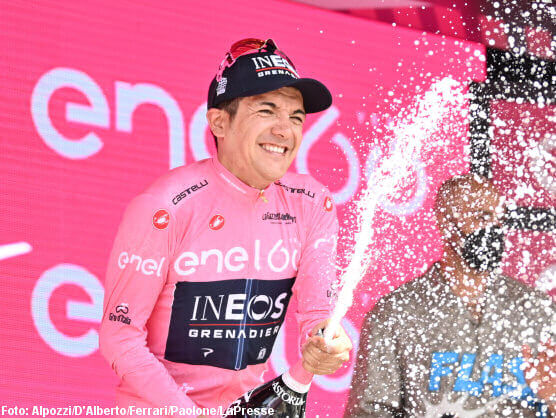 The German team Bora-Hansgrohe and the Ecuadorian Richard Carapaz (Ineos Grenadiers) put an end to the resistance of the Spanish Juan Pedro López (Trek-Segafredo) in the fourteenth stage of the 105 Giro d’Italia, whose pink jersey is now worn by the South American cyclist, third in the goal of Turin, where the British Simon Yates (BikeExchange) prevailed.

The classic profile that the stage had served him to beat another classic, Yates, who added his twenty-eighth victory of his career in a Giro d’Italia that he can no longer win.

The one from Lebrija defended the pink jersey in ten stages, also on this Saturday, until he woke up from sleep when there were 28.5 kilometers left to Turin.

It was a spectacular day, mid-mountain, with a short journey, a constant ups and downs, without big climbs, but with a double climb to Superga and La Maddalena, and with temperatures close to 30 degrees, in which Alejandro Valverde (Movistar ), was soon off the hook after a problem with his bicycle.

They left, among others, the Dutch Tom Dumoulin, leader of the Jumbo-Visma, winner in 2017, and the Italian Giacomo Nizzolo (Israel-Premier Tech).

THE ASSAULT OF CARAPAZ THAT KILLED JUANPE

In the selection of twelve that Bora formed in the lead, with the Dutchman Wilco Kelderman in the lead, to climb La Maddalena, in addition to Juanpe, were the Spaniards Pello Bilbao and Mikel Landa, from Bahrain, Richard Carapaz and the Italian Vincenzo Nibali (Astana ), among others.

At 32 kilometers, again in Superga, Kelderman, who had made a great effort, moved away. His partner Emanuel Buchmann gave him continuity. Bora wanted to corner Carapaz, who had been left alone. The Ecuadorian responded to the attack.

The one from Tulcán made a gesture of escabechina and only the Australian Jai Hindley (Bora-Hansgrohe), Nibali and Juanpe held him in the first instance. Landa recovered and the group was down to ten, with Pello also in it.

Juanpe’s colossal defense ended in another brutal attack by the Ecuadorian with 28.5 kilometers to go. No one could keep up with him.

Carapaz started the second ascent to La Maddalena with a little over twenty seconds lead. From behind, Nibali demarró and Hindley followed, who took the opportunity to leave the Italian behind and go alone for the South American, whom he hunted down. Nibali and Yates also arrived before finishing the climb to the port, 11 kilometers from the finish line.

Yates attacked with little more than 4 kilometers left, in the intermediate sprint, and claimed a victory that had been sought by the Bora team, agitator of the day, and Carapaz, who finished third, behind Hindley.

The Giro d’Italia will continue this Sunday with the dispute of its fifteenth stage, high mountain and 177 kilometers starting in Rivarolo Canacese and arriving in Cogne, second category high end. Before facing the final climb, the cyclists will have to overcome the passes of Pila-Les Fleurs (1st Cat.) and Verrogne (1st Cat.).

Classification of the 14th stage: