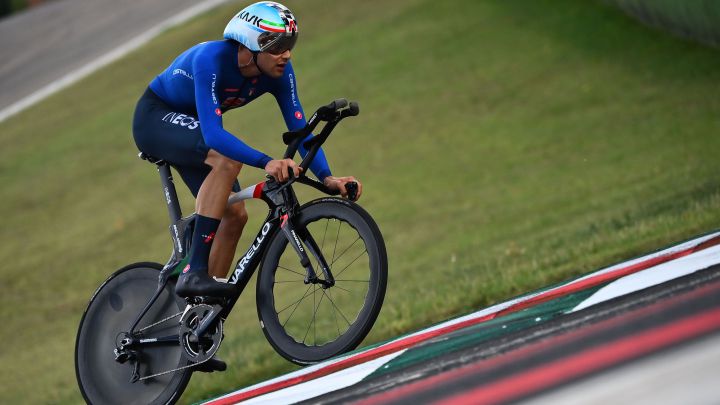 This Sunday, September 19, the Flanders Road Cycling World Championships begin and they do so with a first test in which we will see several of the great figures of the world peloton in action: the individual men’s time trial, which will crown the new rainbow jersey of the modality.

The profile and the route

The men’s time trial of the Flanders Road Cycling Mudiales 2021 will consist of a route of 43.3 kilometers between Knokke-Heist and Bruges, with a total positive difference of 78 meters, which gives many options of victory to the great specialists and rollers on the plain.

The race will leave the coast at Knokke-Heist before moving into the interior of Belgium. Upon reaching Oostkerke you will face one of the few steep slopes on the track before the first intermediate point. From here they will approach Bruges via a loop around a circuit in Dudzele that will take cyclists to the second intermediate point in the vicinity of Damme. From here cyclists will have to face a steep slope before entering the city of Bruges, where the finish line will be located.

Schedules and order of departure

The first participant in the men’s time trial of the Flanders World Cup will start this Sunday, September 19 at 2:30 p.m. local time, although this time could vary depending on the number of cyclists who finally start in the chrono.

Yes, the time at which the last rider will start is fixed (presumably it is the Italian Filippo Ganna as defending champion), which will be at 16:06 local time. The last runner is expected to reach the finish line at around 4:55 p.m. local time and to conclude the test at an average of 53 km / h.

As all the teams and cyclists who will start the time trial have not yet been confirmed, the UCI and the Flanders 2021 organization have not yet published the start times for each rider.

Among the participants in the men’s time trial we can find great names in the peloton who will try to fight for the rainbow jersey to wear the garment in the time trials of the big events on the calendar next season.

Names like the Colombian Rigoberto Urán, the Belgians Remco Evenepoel and Wout Van Aert, who run at home, the Danish Kasper Asgreen and Mikkel Bjerg, the French Rémi Cavagna, the German Tony Martin, and the British Ethan Hayter stand out among the candidates for the podium. .

Finally, the American Brandon McNulty and the Spanish Carlos Rodríguez, the only representative of the Iberian country, should not be ruled out, they will be the figures to follow in the men’s time trial that will inaugurate the World Road Cycling Championship in Flanders.