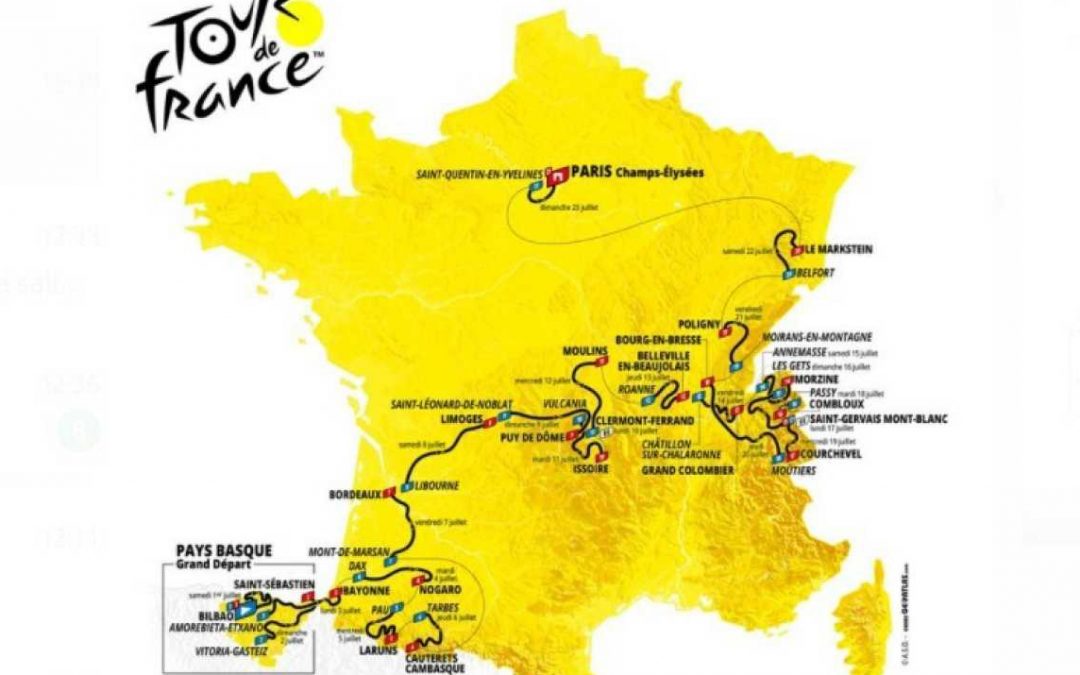 A simple gala served as the starting signal and launch of the 2023 Tour de France route, a very special edition for its start in the Basque Country, through whose territory the first three days will run in an atypically selective start, typical of the Basque geography , for what is usually styled by the French round.

The geographical location of this start forces the Tour de France to have an early presence in the Pyrenees in the race, since we will hardly have to wait for the 5th stage that poses a tricky route between Pau and Lauruns with the very tough Col de Soudet placed in the middle of the stage and with the mythical Marie Blanque a few kilometers from the end, on a completely familiar route for the participants of the well-known Quebrantahuesos march.

The next day another mythical ascent that the Tour de France had not faced for decades returns to the Tour route: Cauterets, but with the added bonus of continuing to the place known as Cambasque, which means going up through the ski resort that crowns the town where the stages of the Tour that arrived here traditionally finished. Before this outcome, the cyclists will have had to travel through the Aspin and the Tourmalet in one of the most traditional chains of cycling.

No less typical and also forgotten for years is the end of the 9th stage, which will return to one of the most iconic ports of the Tour de France: the Puy de Dome. Place that cycling lovers keep in memory for the superb duel that Jacques Anquetil and Raymond Poulidor offered us in the 1964 edition, perhaps the moment that Poupou, the grandfather of Mathieu Van der Poel, of to have achieved that yellow jersey that he could never achieve

From this region, the Tour de France will head towards the Alps, where it will enjoy a first stage, as an appetizer, ending in the Grand Colombier. The next day another of the chained typical of this area of ​​the Alps, which will leave the race in Morzine, after passing through the Joux Plane and its chilling descent towards the finish line.

The third chapter will take the cyclists to Sain Gervais Mont Blanc, another hilltop finish that does not seem decisive and that will end the second week.

After the second day of rest, it will be the turn of the only time trial of the test, just 22 kilometers with which the Tour de France maintains the policy of recent years of focusing on the mountains.

This time trial will be the precedent for the queen stage of the race, a very tough day of more than 5,000 meters of elevation gain through iconic peaks such as Saissies, Cormet de Rosselend, Cote de Longefoy and the ascent to Col de la Loze, on the Meribel station, after returning downhill to Courchevel where the finish line will be located.

After this, just a couple of days of respite for the riders, prior to the decisive stage 20 that will take place in the Vosges massif and that also draws on the history of the Tour de France facing a chain that includes the Ballon de Alsace, the Croix des Moinats, the Petit Ballon or the tough Platzerwasel on a route similar to that of the penultimate stage of the women’s Tour de France that we enjoyed a few months ago.

The key stages of the 2023 Tour de France

Classic Tour de France in which they do not hesitate to introduce clearly transitional stages so that the breakaways play their tricks and the sprinters increase their record, so that the key days are clearly selected moments in which the favorites are in a position to offer the best show. These are, without a doubt, the stages that you cannot miss.

The most traditional chaining of the Tour de France, which seldom disappoints and which will leave the cyclists facing the harsh final addition that gives greater substance to what was the usual arrival at Cauterets in the Tours of the 80s, a goal that in its day was the scene, in 1989, of Miguel Indurain’s first victory in the Tour de France.

The culmination of the first week of the race will be experienced in the ascent to the Puy de Dome. Although the profile of the rest of the stage, presumably single pass, has not been disclosed in the presentation, the sheer hardness of this legendary climb and all the history it treasures is enough to include this stage among those that must be viewed.