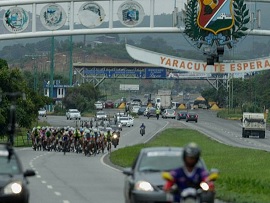 CARACAS. The fifty-sixth edition of the Vuelta Ciclista a Venezuela, a race inscribed in the calendar of the International Cycling Union (UCI), last and all its details for its start on Wednesday, July 17 in the city of Caracas. The test will conclude on Wednesday July 24 in La Guaira after touring the states of Capital District, Miranda, Carabobo, Yaracuy, Lara, Aragua and Portuguesa.

The Vuelta a Venezuela, a test of more hierarchy in the country, will begin to bring emotions on Wednesday, July 17, with the first stage on Avenida Bolivar in the city of Caracas, on a 100-kilometer circuit.

The second stage, on Thursday 18, will start from Plaza Bolivar in the town of Teques, in the state of Miranda, and after traveling 170 kilometers it will end in front of the city hall of Valencia, Carabobo state.

On Friday 19 will be the turn of the third stage, with initial kickoff in Valencia and final in the town of Acarigua, Portuguesa state, with 160 kilometers.

The fourth trip will be Saturday 20, starting from Acarigua and after 140 kilometers it will end in the city of Barquisimeto, Lara state.

The fifth stage, Sunday 21, will be an individual time trial of 30 kilometers in Barquisimeto.

The penultimate stage, on Monday 22, will link the towns of Barquisimeto and San Felipe, in the state of Yaracuy. It will be a 140 kilometer journey.

From San Felipe will depart on Tuesday 23 the seventh stage, with arrival in Cagua, state of Aragua, and 150 kilometers.

The closing of the great celebration of the pedal and the cranks will be Sunday 24 of July in the Guaira, state of Vargas, with a route of 100 kilometers. (esciclismo.com)

STAGES OF THE VUELTA TO VENEZUELA 2019: