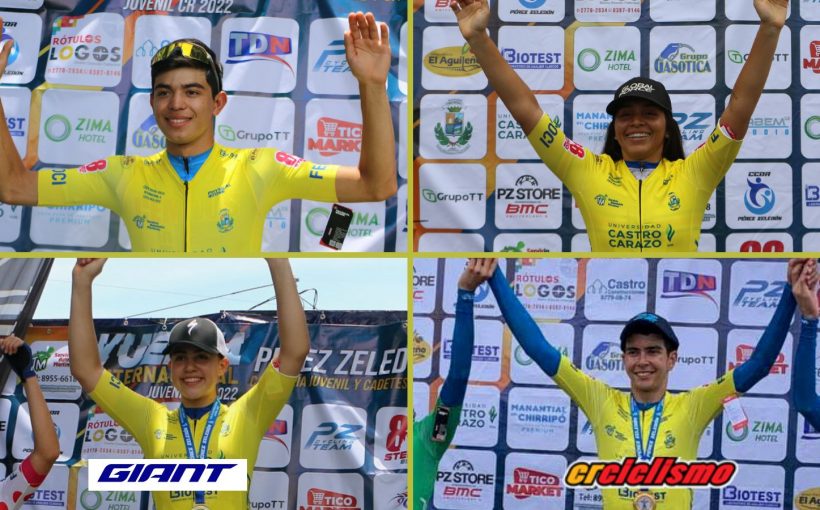 This Friday, August 19, the second stage of the Vuelta Internacional Juvenil y Prejuvenil took place, an individual time trial between the Ingenio Coopeagri and the Miraflores School in the canton of Pérez Zeledón, with only one change of leader in the individual general: Sofía Quirós (Global Force) in the youth category.

The fastest against time were Adriano González and Yiryel Piñar (Colonist Construction-Bike Station), in the Junior Men’s and Junior Women’s categories, respectively. González dominated with a record of 21 minutes and 31 seconds in the 13-kilometer journey. “It was a very tough stage, it was pushing up the way I like it. I knew that I shouldn’t hold back anything and thank God we were given the victory” described Adriano excited by the victory.

His dominance in the fraction allowed him to remain in third position in the general classification, 43 seconds behind the leader José Pablo Sancho (PZ Cycling Team) and share the difference with Jonathan Aguilar (CCDR Cartago), second classified.

For her part, the Costa Rican Yiryel Piñar, who develops more in the Mountain Bike, showed great performance on the road bike and defying the stopwatch. “I competed in Colombia, in an XCO race and I came to the country to immediately ride the road bike and it has been quite a challenge”, commented the young cyclist.

The men’s youth category traveled 13 kilometers allowing a new victory for the Honduran Héctor Menéndez (Honduran National Team), who maintained the general leadership. “It’s my first time on a time trial bike. At the beginning, as usual, I felt a little nervous due to the pressure of the race and because it was my first time on this type of bike. But as the test passed, I adapted more, until I achieved an ideal pace which I knew I could maintain, detailed Menéndez.

Even with his consecutive victory, Héctor spoke cautiously about the remaining stages on Tico soil, in which he will have to defend his first place against Eduardo Hernández (ESPARZA TRAINING – CHICOTE VALDEZ) and Gael Sancho (Colono Construcción-Bike Station).

In the Junior modality for women, at a distance of 10 kilometers, Isabel García (Colonist Construction-Bike Station) ratified her favoritism and left the victory again, also increasing her advantage in the general. Denise Rahilly (Puro MTB- Bianchi) and Naomy Vargas were second and third in the fraction.

The Vuelta Internacional Juvenil y Prejuvenil Costa Rica 2022 continues this Saturday with the third stage between the Municipality of Pérez Zeledón and the Fátima School, La Unión.