A sprint of victory for Sebastián Novoa in Quevedo 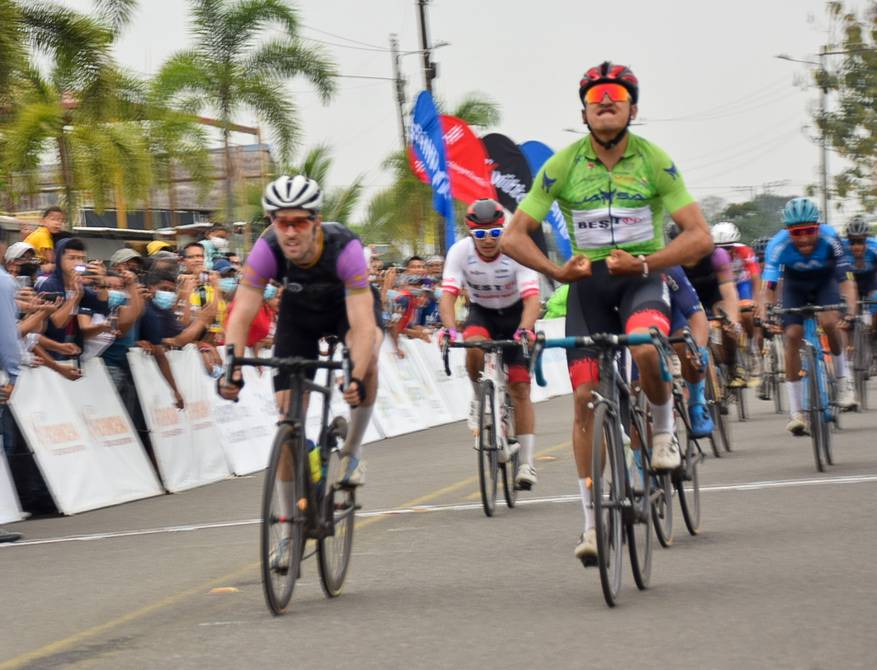 Sebastián Novoa (Best PC) triumphed in the third stage of the Tour of Ecuador, achieved in a close sprint in the city of Quevedo, which received the caravan after a 191-kilometer journey that began in Manta. Lenin Montenegro remained the overall leader of the competition.

In a frantic and no less dangerous closing, Novoa managed to avoid the open traffic to win the finish line, with just centimeters of advantage over the Canadian Jean Michel Lachance (VIE13 Factory Team), the squad that repeated prominence in the test, with his runner Henry York on the run.

“The last ten kilometers there was a lot of walking, but it was possible to work well and take advantage of the moment to launch the sprint and add this stage,” Novoa commented to the media after the victory.

From the beginning of the fraction, the attempts of the adventurers in search of taking off from the platoon were seen. Forrest Howard was the one who sought to take the initiative and add seconds ahead of the group.

Howard neutralized, his teammate Henry York went for the points in the flying goal at the entrance of Portoviejo, but he could not against Alexis Narváez (Team Pichincha) and Hugo Quinotoa (Oro and Grana), who kept the score.

With Cristian Toro (Movistar) added to the head of the race, the group of four cyclists opened a gap with the peloton, which was separated by three minutes. The group kept the difference and Toro took the points in the mountain prize at kilometer 42, with alternation at the top so that Narváez kept the flying goal on the road to El Empalme.

The passage of the caravan aroused the curiosity of passersby who asked about the presence of national WorldTour cyclists, citing Richard Carapaz (Ineos Grenadiers) or Jonathan Caicedo (EF Education – Nippo).

Next, the escapees faced the ascent to the second mountain prize at kilometer 80, finish line and dry braking for the cyclists before the neutralization of the test due to the poor condition of the road to Pichincha.

They were 20 kilometers in which the peloton rolled without taking time, to resume the fight although without being free of mishaps due to road damage in the sector.

With the clock running again, it was Team Pichincha who assumed the leadership, with David Bedón and Steven Haro, joined by York, Carlos Guerra (Montes Bike) and Kevin Pozo (100% Imbabura) to stretch to 4 minutes 30 seconds the difference with the batch of favorites, and at that point with Haro as the virtual leader of the race.

York took advantage of the wear and tear of his fugitive companions and launched an attack that left him alone to win the third flying goal at El Empalme, with a difference of 3 minutes 45 seconds with his followers and 8 minutes over the peloton.

The group of leaders adjusted the pace in the final kilometers to cut the gap and have Novoa in the lead, who stopped the clock at 4 hours 23 minutes 2 seconds, followed by Jean Michel Lachance (Factory) and David Villarreal (Movistar) .

The general classification and the sub-23 remain with Lenín Montenegro (Movistar), with Novoa leader of flying goals and Stalin Puentestar (Eagle Bikes) as the best on the mountain.

The Tour of Ecuador continues this Saturday with the fourth stage, a 102.4-kilometer day that will link Quevedo with Santo Domingo de los Tsáchilas, the last fraction on flat ground, before the decisive stages in the northern Sierra of the country.

Classification of the third stage of the Tour of Ecuador in 2021: