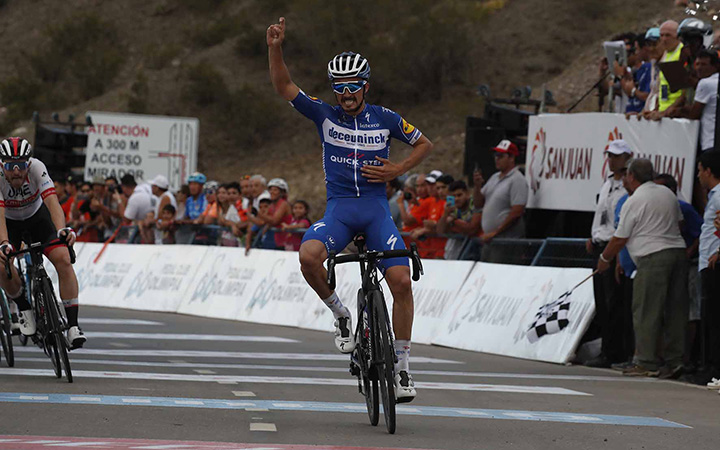 SAN JUAN. The Frenchman Julian Alaphilippe did not disappoint in the second stage of the Vuelta a San Juan and, showing signs of his quality, he won the Peri Largo Punta Negra with an exhibition in the final meters where he left the whole bunch hanging.

Alaphilippe, of the Deceunik-Quick Step, which with twelve wins was one of the most outstanding of last season, arrived in San Juan as one of the international stars and the first opportunity he had got a claw to raise his arms in the Argentine round .

The runners faced a journey of 134 kilometers, almost thirty less than initially planned due to the cut made by the organization by the intense heat that reigned in the area. On the way, five steps up Punta Negra, in the third category, although the last one, in which the final selection was made, was not scoring for the mountain.

Fernando Gaviria, after his triumph in the first stage, remains as leader of the general classification, 3 seconds behind the French, who escorts him.

The race broke with twenty kilometers to go, when Schreus jumped out of the group and began to open a gap on his pursuers, although a little less than five for the finish line was hunted. The peloton headed neutralized the flight and that was the moment that Deceunink-Quick Step took to impose its rhythm and wait for Alaphilippe to change the pace and leave everyone behind. Sevilla tried to follow, but it was impossible and the French entered alone.

In the general classification the Colombian Fernando Gaviria, of the UAE Team Emirates and winner of the first stage, continues as leader by a flying goal with three seconds of advantage over Alaphilippe. The third stage of the Vuelta a San Juan will be a 12-kilometer time trial by Pocito. (EFE)