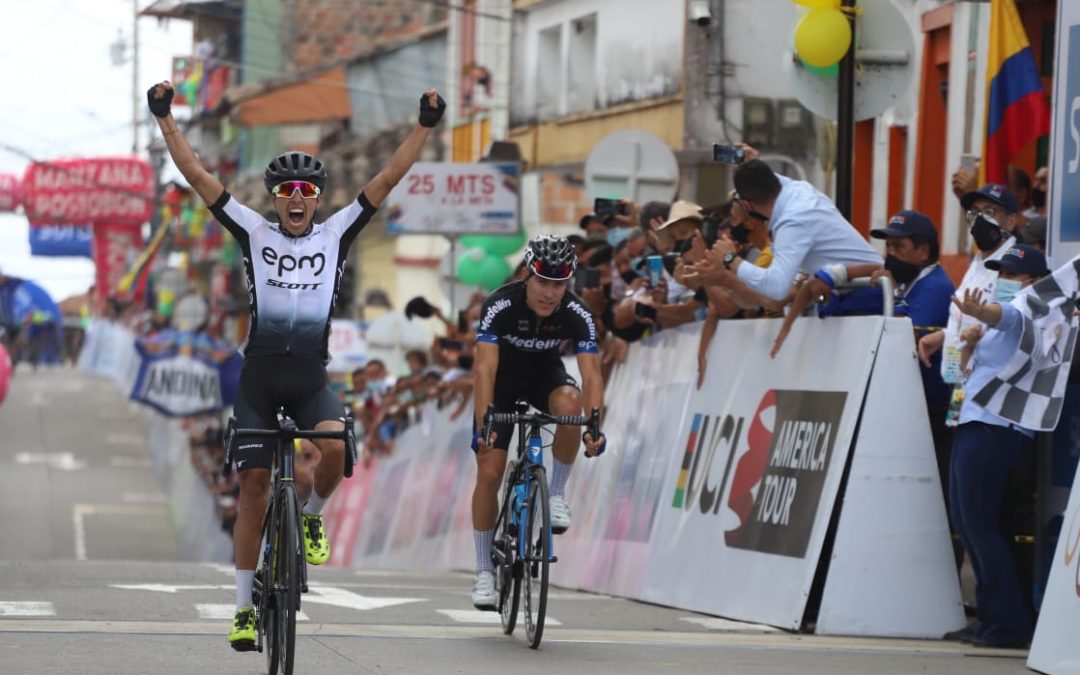 Aldemar Reyes, a runner from Boyacá, celebrated this Wednesday, April 21, alone, in the Caldense town of Belalcázar, where the fifth stage of the Tour of Colombia Mindeporte 2021 finished, which maintains as leader Yesid Pira, also from Boyacá ( Alcaldia de La Vega).

The platoon, with 154 runners, took the 146-kilometer departure in the city of Armenia that would take them to Belalcázar, a day that generated a lot of expectation for the defense that Yesid Albeiro Pira would make of his leadership.

Many skirmishes in the group were seen from the start of the day. The escape attempts were many, but none were more successful, as the main group was not willing to allow any adventure to form. Some runners did not lose hope and tried to go ahead, as was the case with Bryan Gómez (Superdrafts), who was head of the race for a while, but after the first special sprint, where he won alone ahead of Cristian Talero ( Herrera Sport) and Óscar Quiroz (Colombia Land of Athletes), the group connected him.

On the way to the second sprint of the day, three runners were encouraged and left the lot: Bernardo Suaza (Team Medellín), Nelson Soto (Colombia Tierra de Atletas) and Camilo Castro (UAE Team Colombia). This trio contested the sprint at kilometer 82.6 of the race, which was won by Soto, followed by Suaza and Castro.

At 103.7 kilometers into the race, the third special sprint was located, where Soto won again, followed by Gómez and Matute. The adventurers of the day managed to get a difference of more than 1 minute from the main group, which they maintained in the ascent to the first pass of the day in Alto Cerrito, kilometer 115 of the race, this time the winner was Suaza, who crossed the line first , ahead of Castro and Iguavita.

In the first 2 kilometers of the ascent to the second mountainous pass of the day, Alto La Alemana, the runners who were leading the race were neutralized by the group, which at that time was already bringing the favorites of the general to the front, looking for the terrain that favors them to stalk the leadership of Pira, who once again fought like the greats during the day, defending himself, on several occasions, the attacks of his rivals.

At the port, José Tito Hernández (Team Medellín) from Antioquia, who knew the path perfectly, as he prevailed in this town last year, went to the fore and won the last mountain award, for which Aldemar Reyes ( EPM-Scott) and Alexander Gil (Orgullo Paisa) crossed second and third, respectively.

The last 5 kilometers were heart attack. The Antioqueño Sebastián Castaño (Orgullo Paisa) left the group and went to the top, after him only Aristóbulo Cala (Sundark) and Aldemar Reyes left, who with 3 kilometers to go, pressed and continued alone in search of the arrival.

Only the Boyacense appeared at the sentencing line, who raised his arms and celebrated the victory, giving the first stage victory to the team of Raúl and Gabriel Jaime Mesa in this 71st edition of the Vuelta a Colombia.

After the Boyacense, José Tito Hernández reached the goal, with the same time, and Alexander Gil at 5 seconds, who rose in the general to second and third place, respectively. At 11 seconds the group of favorites of the general classification arrived, with leader Yesid Pira, who kept the Orange shirt without problems for one more day.

The sixth fraction of the Vuelta a Colombia UCI 2.2 will be held this Thursday, April 22, with an Individual Time Trial of 19.8 kilometers between Chinchiná Cenicafé and Torre Cyprus in Manizales. It will be a time-trial with a mountain prize on arrival and that can be followed by television transmission that will begin at 10:30 in the morning on Channel RCN, Win Sport and Signal Colombia.