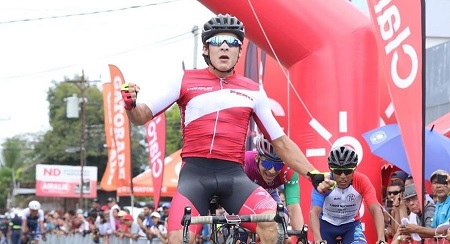 CHIRIQUÍ. The national cyclist Alonso Gamero shone again in the Tour of Chiriquí, which is taking place in Panama. Last Friday, the Peruvian won the second stage of this competition and three days later, with a time of 4h1m37s, he returned to climb to the top of the podium in the fifth stage, which was called ‘David-Los Anastacios-Circunvalación -San Andrés-Circunvalación-David.

“All stages have their degree of difficulty. Today it was thought to be flat, but the teams made it difficult. They were 170 kilometers very complicated to drive. It was a very leg-breaking stage, because it got on and off, “Gamero told Cr Cycling.

“I am very happy for the work we are doing with the team (Alaín Quispe and Steve Robinson). We are going to continue fighting to finish in the best way this Vuelta a Chiriquí ”, added the Peruvian credit.

At the beginning the race would be 141.4 km, but at the last moment it was decided to extend the distance. The podium was completed by Guatemalan Luis López and Panamanian Randish Lorenzo, who timed the same time as Alonso. Meanwhile, Costa Rican Daniel Bonilla took over the first place in the general classification (16h20m50s).

This Tuesday will be an individual chrono (time trial) of 19.2 kilometers between Chiriquí-Punta Tierra-Chiriquí. This Tour has, in total, 8 stages and will run until Thursday, November 28. (depor.com)