America dominates the Giro: Colombia and Ecuador, Buitrago and Carapaz 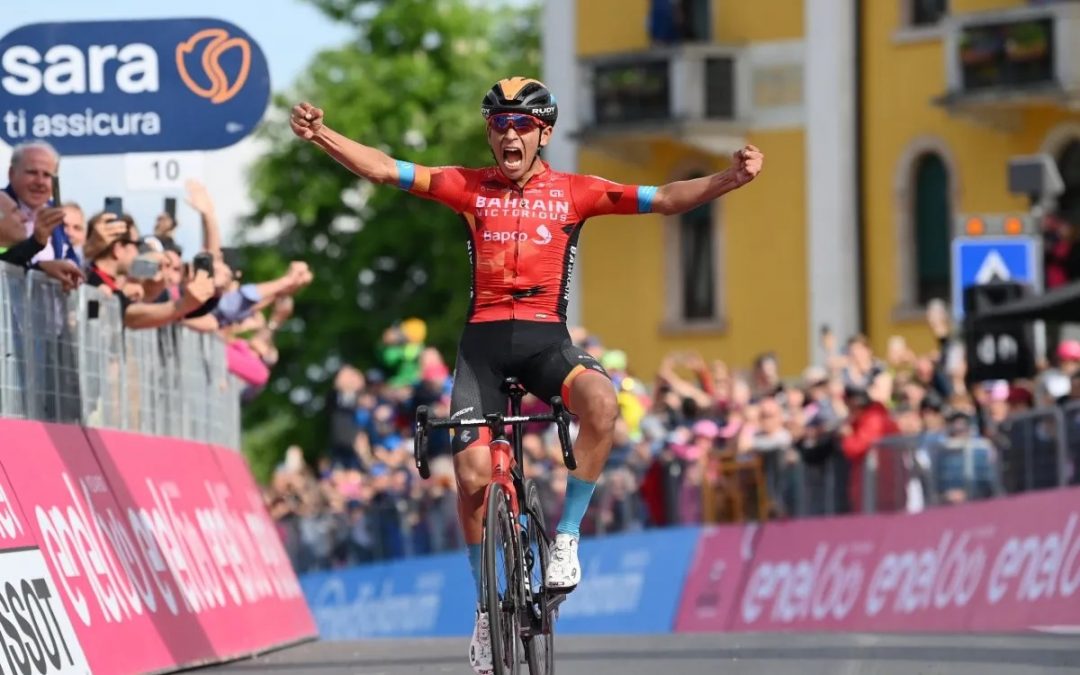 Santiago Buitrago became the youngest Colombian to win a stage in the history of the Giro d’Italia, after entering Lavarone first on the seventeenth day, after an attack in the final kilometers where he also fought for the podium general had the Ecuadorian Richard Carapaz in defense of the pink jersey.

The Bogota native (Bahrain-Victorious) reached his second professional triumph after rejoining from a fall on Wednesday and having a bitter taste after finishing second on Sunday in the ascent to Cogne.

“The key to winning today was patience on the climb. I think I played it well. The victory is for my family in Colombia and for all those who have supported me to this day”, said Santiago Buitrago at the end of the fraction.

Of the 16 beetles that have achieved a stage victory in the Italian round, Buitrago, at 22 years, 7 months and 29 days, became the youngest Colombian to win a fraction in the history of the Giro d’Italia.

“This is wonderful, it is a very special day for me. Satisfaction that things have been done well so far. This victory gives me a lot of morale for these remaining days of the Giro”, concluded Buitrago.

With Buitrago at the finish line, attention focused on the fight for the podium, defined in a sprint between Carapaz (Ineos Grenadiers) and Jai Hindley (Bora-hansgrohe), the first in favor of the Ecuadorian, who maintained the difference in the lead. Carapaz entered fifth at the finish line, followed by Hindley, four places behind Mikel Landa (Bahrain) and Joao Almeida (UAE-Team Emirates) in box 14, among those fighting for the general.

As soon as the stage was launched, the ascent to Passo del Tonale arrived, a non-scoring pass that marked differences between the peloton, with a small group that tried to break away from the group, an objective achieved on the descent, with 23 runners on the run and a difference of more than 2 minutes with the favorites.

The breakaway added more runners and came to be 25, although with six elements among the 20 best classified, none to put the leadership of the test at risk.

With 100 kilometers to go, the difference achieved by the escapees reached 4 minutes, to have Koen Bouwman (Jumbo-Visma) as the winner in the Giovo mountain pass, in the third category.

Among those at the head of the race, movements were generated that split the group, with Mathieu van der Poel (Alpecin-Fenix) looking to take the distance, but with Guillaume Martin (Cofidis) winning in the intermediate sprint of Pergine Valsugana.

Felix Gall (AG2R Citröen) and Alessandro Covi (UAE-Team Emirates) joined the front and opened a gap with a group of five runners, who with 40 kilometers to go managed to group themselves in the lead, with the batch of favorites 6 minutes away, commanded by the Bahrain-Victorious.

Ineos made the majority in this group and the pace imposed managed to isolate strong names, the same intensity as Van der Poel and Bouwman, who won the mountain award again at Passo del Vetriolo, to secure the azzurra jersey.

In the descent Van der Poel and Gijs Leemreize (Jumbo-Visma) took off, who stayed with Caldonazzo’s sprint, 20 kilometers from the finish line and with a difference of 5 minutes over the group in the pink jersey.

In the group of favorites, Joao Almeida (UAE) lost ground, Carapaz arrived with the support of Richie Porte, Landa seconded by Wout Poels and Hindley alone, before facing the final 10 kilometers.

Colombian Santiago Buitrago (Bahrain) jumped out of a break divided into five parts to go in search of Leemreize, while Landa shook up the favourites.

The coffee grower sprinted to leave Leemreize on the road and take the mountain prize in Monterovere, 8 kilometers from the finish line, a new section also for one more attempt by Landa to drop his direct rivals.

Carapaz and Hindley kept pace with Landa and Poels, in a batch that caught up with the breakaway stragglers, with Buitrago ahead with 3 minutes and 20 seconds, headed for the finish line.

Those on the podium pressed at the end. Carapaz led a sprint to maintain the time lead with 3 seconds to Hindley to keep the pink jersey. Landa was 1 minute 05 seconds and Almeida another 49 seconds, the four who fight for the title.

The second best tricolor at the finish line was Alexander Cepeda (Drone Hopper-Androni Giocattoli) in 57th place, while Jhonatan Narváez (Ineos) occupied box 71, which led to a rise in the general classification for Chalequito, who went to 107th place after winning 9 positions. Narváez lost a position and is in box 40.

The climbers will have a less intense day this Thursday, stage 18, which will be for the sprinters with the section between Borgo Valsugana and Treviso, a 156-kilometre route, downhill, with two fourth-category mountain prizes and two intermediate sprints.