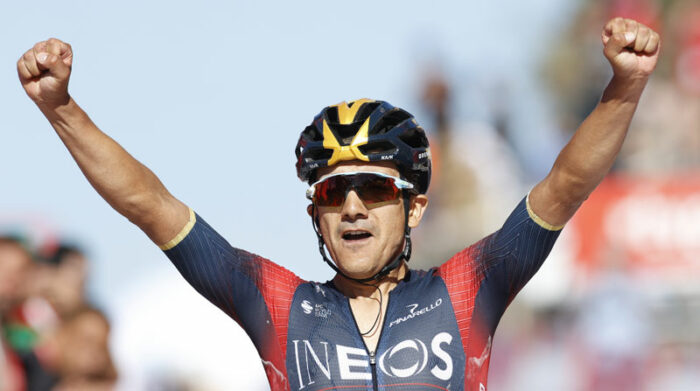 The Ecuadorian cyclist Richard Carapaz won again in the Tour of Spain and crossed first in stage 14, which meant the most productive day for our continent, as the Colombian Miguel Ángel López came in second, with the same time as the Slovenian Primoz Roglic, third this Saturday.

The Tokyo 2020 Olympic champion got into the breakaway and then was the strongest in the final kilometers, which included demanding climbs. This is another historic triumph of the ‘Locomotive’ among the best cyclists in the world.

With 3.5 kilometers to go, Carapaz made a sensational attack and dropped to the front of the race. Then, everything was emotion and suffering because at the same time Primoz Roglic made an attack on the chasing group of the favorites and placed himself about 30 seconds behind the Ecuadorian.

However, with that quality and courage that distinguish the tricolor, Carapaz remained strong on the pedals and prevailed with authority by crossing the finish line alone in 4:09:27 hours of racing. This is his fifth grand tour stage win, following his successes at the Giro d’Italia (one in 2018 and two in 2019) and the equally exciting stage 12 at the Spanish round on September 1, 2022.

In his statements after winning in Sierra de La Pandera (160.3 km of travel), Carapaz assured that he came out psyched to get into the breakaway.

“We knew that it was an important stage, that we could repeat what we did the other day. In the end I was at the right moment, I was able to attack and I went alone. I knew the climb very well, I tried to climb at my own pace without despairing. It was an important stage for my record, above all with a lot of morale to leave here this round”, he said.

“I was able to be in the good (escape) and take advantage of the moment. The truth is that I have done very well, I am very happy,” added the Ecuadorian.

On stage 15, which is also in the mountains and that he knows well, Carapaz assured that he will try again.

In the general classification, Carapaz moved up two positions and is now in the 17th box at 13:44 minutes.

The end of this day was very hard, with about eight km of tremendous ascent on somewhat irregular terrain, which was a great difficulty for the athletes. There were ramps of up to 15%, which was very difficult and made a difference between the favourites.

This Sunday the high mountain stage 15 will be run between the town of Martos and Alto de la Mora, in the Sierra Nevada, at a distance of 149.6 kilometres.