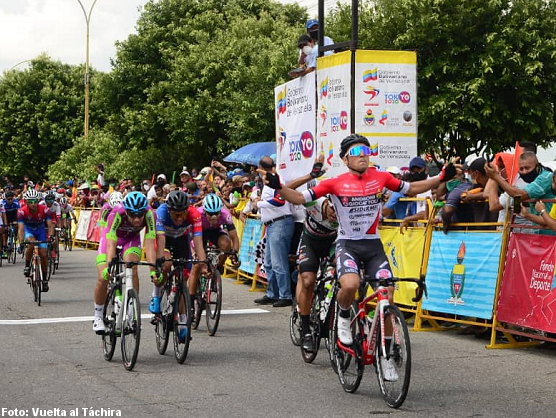 For the fifth consecutive year, the Italian Androni Giocattoli-Sidermec squad led by Gianni Savio takes over the opening stage of the Vuelta al Táchira.

Matteo Malucelli raised his arms over the final line located in La Vigía, after the 131.9 kilometer dispute that started early in the morning from Lobatera.

Malucelli won this initial fraction for the second time, before he had done it in 2018 and continued the chain of consecutive victories for his squad that began in 2017 with Rafaello Bonusi and continued in 2019 with Marco Benfatto and Luca Pasioni last year.

The 27-year-old native of Forli timed a time of 2 hours, 51 minutes and 35 seconds and defeated in the final sprint the Colombian Johan Colón from Orgullo Paisa and his fellow countryman Nicolás Dallas from Bardiani CSF, which allowed him to get the Leader of the jersey. Great Tour of America.

The route included the dispute of four intermediate sprints, in the first of them kilometer 30 on the Táchira Highway Isaac Yaguaro of VIT Osorio was left with 4 points and 3 bonus seconds escorted by the Colombian from Team Medellín, José Tito Hernández (2 points and 2 seconds to his credit) and Pedro Jerez, also a coffee grower from Guerrero Arduvi, who got one unit and the same discount for his Individual General Classification.

In the second intermediate sprint of the day, in Arturo, the Dominican from Gesprom Evolution, Rudy Germoso monopolized his first of two satisfactions of the day, Christofer Jurado entered the winner’s wheel again and again another rider from Guerrero Arduvi, this time Josimar Jerez completed the trio.

The third sprint of the day, the second that delivered a bonus on the day, had Germoso again as the winner, again escorted by Jurado, with Yaguaro in third position.

Finally, at the Zea Toll, Danny Osorio from the Orgullo Paisa, Jorge Castel from the Panama National Team and Leonidas Novoa from the Best Pc of Ecuador, shared the honors.

The painful note of the day was given by the Guatemalan National Team, which could not start the stage, when three of the 8 members of its delegation tested positive for Covid-19 and all were placed in isolation, according to the protocols of biosecurity

Tomorrow the second stage will be run in a Circuit with start and finish at the Campo Elías Viaduct, Mérida, which will have a distance of 11.3 kilometers and which the peloton will have to do 10 laps to complete the agreed distance of 113 kms.

A practically flat stage that will have intermediate sprints in laps two, four, six and eight, with bonuses for the first and third of them.