Another crazy day at the Tour of Colombia: Duarte wins and Rico is the new leader 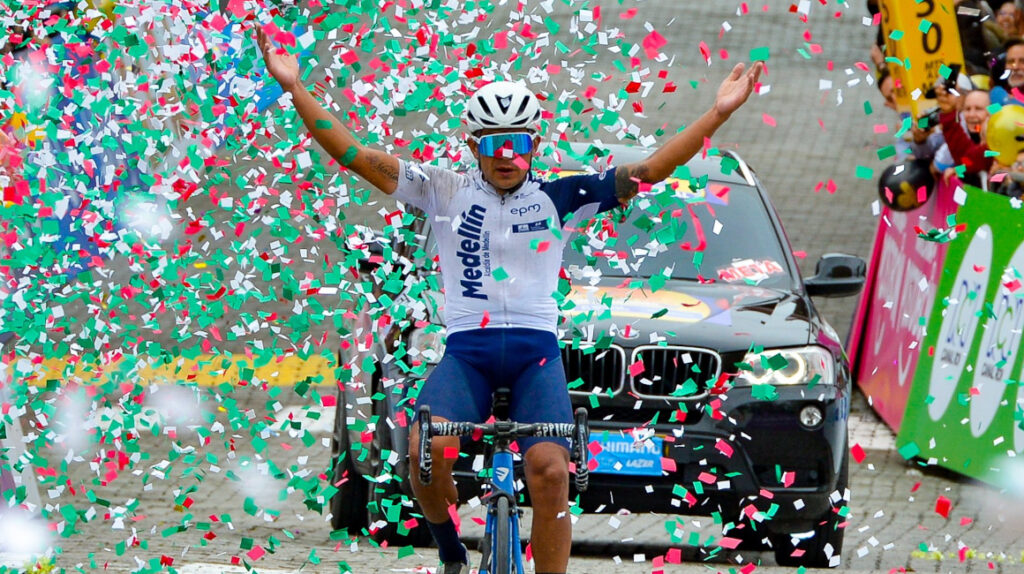 On a day where the cold, the rain, and the withdrawal of 28 runners stole the biggest headlines, Fabio Duarte (Team Medellín) won the fifth stage of the 72 Tour of Colombia, while Cristian Rico (Colombia Tierra de Atletas ) went on to lead the general classification and is the third leader of the race.

Duarte won his sixth stage of the Tour of Colombia in his career. The Colombian attacked on the last mountain pass and caught the escapees one by one, until he took the victory alone, with an advantage of 24 seconds.

“When I attack I like to give everything of myself and make up the differences, that’s how we got through today’s stage,” said the winner, who was escorted on the podium by Hernán Aguirre (Sistecrédito) and Rafael Pineda (Colombia Tierra de Atletas).

For his part, Cristian Rico from Boyacá assumed the leadership in the general classification due to the fainting of Óscar Quiroz, his teammate in the Colombia Tierra de Atletas, who on Monday had dominated the stage and risen to first place, but this Tuesday he ran out of strength in the final stretch and gave up more than five minutes with respect to the batch of favourites.

“We had to change because of what happened yesterday. We chose another running strategy, it’s not easy, but it’s not impossible. Nothing is written, this is not about talking, it is about pedaling and the kilometers put each one in their place. You have to know how to run in what remains”, said Duarte optimistically to the media.

The former U-23 world champion exhibited all his quality, class and experience in the mountains, a terrain that suits him very well and in which he feels like a fish in water. “I like to attack and today I made up my mind, we proposed an offensive race and thanks to the work of my team and Brayan Sanchéz, especially, we were able to save time.” added the Facatativá rider.

For his part, the new leader of the race stated at a press conference: “I am happy for this leadership, the truth is that I did not expect it, I came with the mentality of contributing to the team and to Quiroz. Our leader didn’t have enough legs to get there today, but he’s happy with the team’s leadership”.

In his second participation in the Colombian round, the young man from Boyacá, who arrived as a domestique of Darwin Atapuma and Wilson Peña, remained in the pack of favorites on the climb to La Unión and unintentionally led the general classification.

“The truth is I don’t measure it, I don’t believe it, when I was little I dreamed of running a grand tour one day here in Colombia, but it never crossed my mind to wear a leader’s jersey. It seems crazy to me and seeing this dream come true fills me with a lot of pride and happiness”, added the U-23 rider.

The Colombia Tierra de Atletas rider GW Shimano will defend this Wednesday the leadership in the sixth stage, which will start from Rionegro and pass through Marinilla, Santuario, Cocorná, Doradal, Puerto Salgar to finish in La Dorada, in a day with a final on the ground flat.