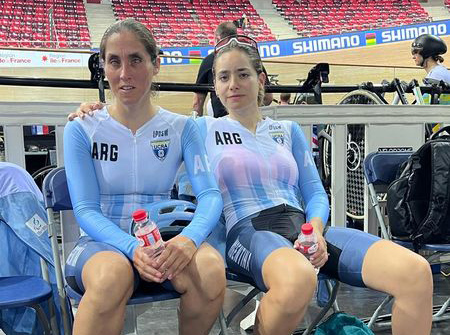 Already training at the Saint-Quentin-En-Yvelines national velodrome, in France, are the six cyclists from Argentina and the ten from Colombia who will defend their respective nations in the Paracycling Track World Championship, to be held from 20 to October 23.

The gaucho delegation, commanding the Pampa Ferrari, is made up of Majo Quiroga-Micaela Barroso (tandem B), Mariela Delgado (C5), Rodrigo López (C1), and Maximiliano López-Sebastián Tolosa (tandem B), who have the objective of return to their country with at least one podium in some of the modalities.

The world event will begin with the functional classification days and official training sessions, while the competitions will take place from the 20th to the 23rd of the same month.

The World Cup will end on Sunday, October 23, with the scratch in WC1-2 and in MC2; as well as the sprint, in both branches.

Both teams, from Argentina and Colombia, will compete in France with the support of the Ministries of Sports and the respective Argentine and Colombian Paralympic Committees.