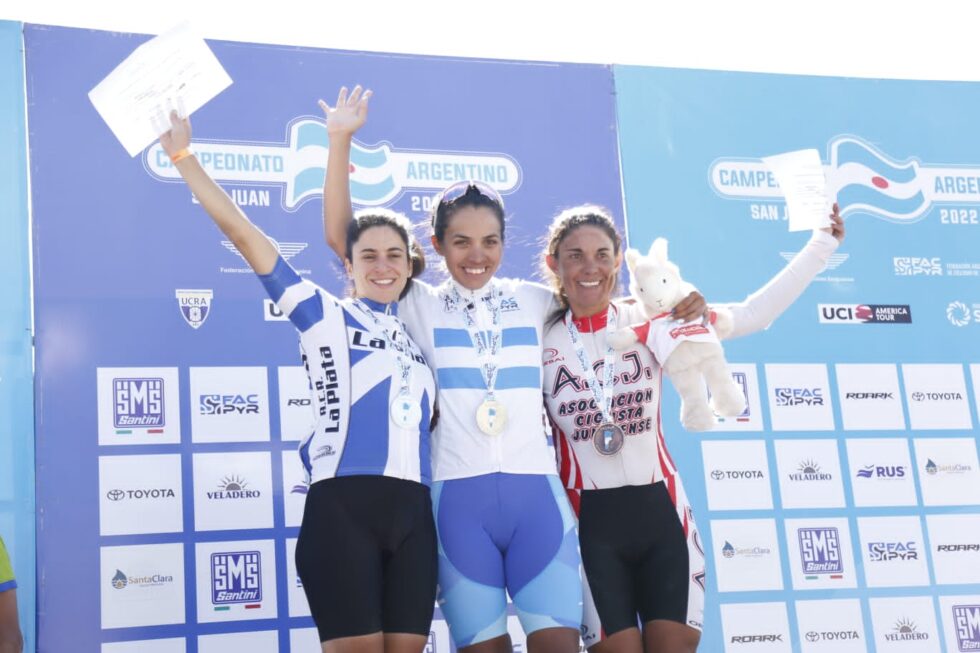 Competitors from San Juan Maribel Aguirre (Elite) and Magalí Balmaceda (Under 23) won the long-distance event for the ladies, while another San Juan, Emiliano Contreras, did the same among the men (Elite), and finally Lukas Dundic , from the Mar y Sierras federation, did so among those under 23 years of age.

On the second day of the Argentine Road Championship in San Juan, the first of two races at the Villicum Circuit was the road stage for Ladies. Maribel Aguirre beat Sofía Marteli (La Plata) and Anabel Ruiz (Juninense) in the sprint.

For her part, in the sub23, the gold went to Magalí Balmaceda from Sanjuanina, the silver to Micaela Gutiérrez from Pueblo de la Paz and the bronze to Daniela Muñoz from Río Negro Alto Valle.

The demanding test began at 9 am inside the Villicum Circuit. And the group of cyclists, from all over the country, made up a large squad that gave their best for the great show they put on. More than 50 cyclists participated, who rode 20 turns to the albardonero route. It was a total of 84 kilometers.

Emiliano Contreras struck and was crowned at the Villicum

On the last day of the Argentine Road Championship in San Juan, the public present at the Villicum Circuit enjoyed the online stage for Men Elite. After 188 kilometers, the great victory went to Emiliano Contreras, representative of San Juan.

The day of the most convening test of the competition program arrived. The peloton race brought together more than 130 cyclists. From 9 am, in the boxes of the autodrome, each team lived the previous one in its own way. During the concentration it was possible to notice that there was a race atmosphere in the environment.

The cyclists raid began to give the first levers after 10 hours. After a turn around the route on the excursion train, the caravan left the circuit. The Elite Men did the same route as the Sub 23. They went to Albardón, Angaco, San Martín and returned to Villicum. With the difference that in the autodrome the older ones made 27 laps. A very demanding test.

Lukas Dundic was gold in a race of the sub23

The rider from Mar y Sierras raised his arms in the last race of the Argentine Championship for the juniors. All competitors left everything behind for the show.

This Argentine Road Championship in San Juan offered the public a great online stage for Boys Under 23. After a particular route, the well-deserved victory was in the hands of Lukas Dundic, who represents the Federation of Sea and Mountains.

A caravan made up of 69 souls left the Villicum Circuit and toured other sectors of the province. The cyclist train passed through Albardón, Angaco and San Martín. And when they returned, those who were still in the race took fifteen laps inside the racetrack. The total number of participants was 138 kilometers.

Finally, an attack by Lukas Dundic defined the test in the man of the Sea and Sierras. The silver went to the local Adolfo Alarcón and the bronze went to Gonzalo Lyardet from Neuquina.