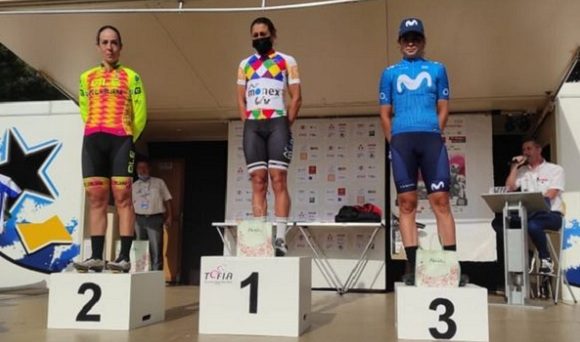 The 28-year-old Manzanilla clocked 3:10:02 hours, she dominated in the final sprint the Italian Marta Bastianelli and the Spanish Sheyla Gutiérrez, who finished second and third, in that order.

“Once again on the highest step of the podium: Arlenis Sierra wins the first stage of the TCFIA and is the first leader of the general ranking!”, Announced the A.R. Monex Women’s Team on your organizational profile on Facebook.

The journey was 111.95 kilometers between Aubenas and Barjac, with the great mountain prizes of La Fontaine du Cade and the Montagne de Serre, in the south of France.

Sierra comes to this event after winning the Giro de la Toscana in Italy on August 29, where she repeated the title of the previous edition, with her leadership during the three stages of that world classic.

In 2019 the Cuban, then captain of the Astana Women’s Team, finished ninth in Ardèche, where she rose to two podiums, with the third seat in the sixth and seventh days, in a fight won by the multiple Dutch Olympic and world champion en route , track and cyclocross Marianne Vos.

This Thursday, the Anneyron-Beauchastel stage (122.64 km), with the great mountain prizes of Col de Barbe Bleu, Côte de Talencieux, Les Oziers, Côte de Cornas and Col du Rotisson, will be the second of the seven stages of the Tour, which, from Ardèche, will cross the Drôme, Le Gard, La Lozère and Vaucluse departments.

By A.R. Monex Women’s Team also compete with the Mexican Ariadna Gutíerrez, the Italians Katia Ragusa and María Victoria Sperotto, the Russian Mariia Miliaeva and the French Jade Teolis, in a race that will culminate on September 14, five days before the World Road Cycling Championship , scheduled for the 19th to the 26th of this month in Belgium.