Arlenis Sierra won the opening of the Cycling Tour of Andalusia 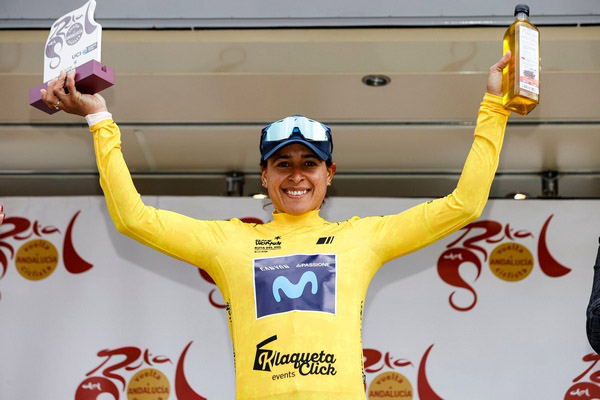 The Cuban cyclist Arlenis Sierra, of the Movistar team, prevailed this Tuesday at the opening of the Vuelta a Andalucía Ruta del Sol, finishing before reaching the finish line and in full ascent to the Spanish Mavi García (UAE Team ADQ), to who granted a similar time to the Cuban, 2:59.01 hours in the 105.5 kilometers from Salobreña to Arenas.

It was Sierra’s first great triumph with the outstanding cast led by the Olympic and world champion Annemiel Van Vleuten, a privileged position that the Dutch ceded due to injury to the Cuban, who fully complied with the club’s strategy.

In this stage, run along a rough and coastal route, they followed the first two Ricarda Bauernfeind (Canyon/SRAM Generation) and the Colombian Paula Patiño (Movistar), 15 seconds apart.

Then came Michaela Gill (Sopela) at 17 seconds; Antri Christoforou (Farto–BTC) at 1.02 minutes; the Spanish Sara Martín at 1.07; and the Australian Sarah Gigante and the Norwegian Katrine Aalerud at 1.08, the last three also from the “telefonicas”.

These Movistar results, among the 87 that completed the hard and long stage, are confirmation of their excellent collective work in which the Serbian Eric Jelena also took part, finally placed in 57th place at 5.29 minutes.

This Wednesday the second and penultimate stage is run, which must be defended by this same team that shone so much in the opening. La Sierra will wear the yellow jacket as the general leader, although she also commands the points classification and is second in the mountains.

“You always fight for victories. Today we have achieved it as a team and that makes me very happy, for me and especially for the “girls” who worked extremely well. We organize ourselves really well and that gives me confidence that hopefully I can keep the pullover until Thursday,” she said.

“When Mavi left, Paula was behind her and I started the climb quietly, always looking at Paula with Mavi, making sure she didn’t stay. Then, when I realized that Paula was separating a little, I said: Well, I’m going to react and “jump”, because if she’s not going to leave Paulita, “she added.

“So it was. I had a bit of work to get to her, because they were quite far from her, but I got to her in the middle of the descent and that was also what favored me facing the finish line”, she narrated.

On Wednesday’s day, one of the toughest stages, the Cuban expressed that “Mavi is a tremendous runner, a good climber, I know it will be a bit difficult, I’m not saying no, but for lack of fighting it will not be. I think the best thing we have is the team, that we understand each other a lot and we’re going to do a good job”.

She acknowledged that “I don’t know much about the race, I know that I suffer a lot on long climbs because I’m not a pure climber, but I’m going to fight. You never know… Maybe it won’t be me and it will be someone else from the team who takes the distance. We will fight until the last day.”