BEFORE THE TOUR, SAN JUAN WAS A HEADQUARTER OF THE SOUTH AMERICAN CYCLING CONVENTION 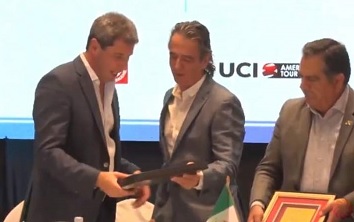 At the opening of the convention, the words of the governor of San Juan and Honorary President of the USC, Sergio Uñac, were heard: “The people of San Juan are appreciating the great effort made by the Government to make sport a part of San Juan’s society. We recognize sport as the great social articulator and in this 37th edition of the Vuelta a San Juan it leaves us the responsibility of putting cycling back on a world stage … Sport helps to form worthy citizens, with the opportunity to discern. The best teams and cycling leaders are in San Juan, identified by this discipline in each of its inhabitants”.

While Curuchet thanked “this province, which lives with great passion cycling, today is a very special day for cycling in South America, I think this is the best time to follow the guidelines of the UCI, expressed in axes such as vision , solidarity, attractiveness and legacy, following this path we will go in the right direction, we have a South American continent with the best cyclists in the world and they have set the bar very high “.

The act was also recognized by the authorities Juan José Chica and vice president of COPACI (Pan-American Cycling Confederation) Edgardo Hernández.
Then, Juan José Chica said that the practice of sports contributes to “prevent young people from falling into addictions” and welcomed the participants of the competition.

Subsequently, Edgardo Hernández thanked the governor for “the support given to this discipline, we would like to have many people like him in all the countries present here and give society the opportunity to practice this discipline.” (tiempodesanjuan.com)