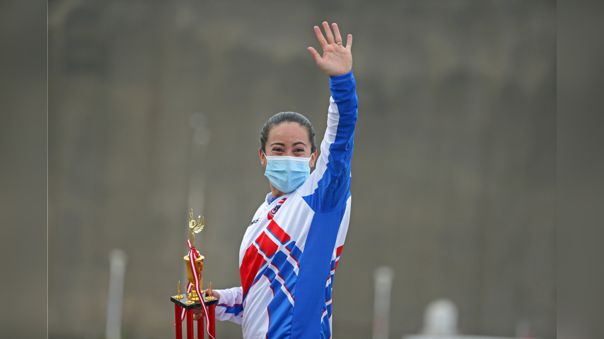 The closing of the South American BMX Championship had the same champions of the previous day, the brand new continental monarchs: Mariana Pajón and Diego Arboleda, who ratified Colombia as the great power of America in this modality.

Pajón, known as “the golden girl”, reigned again in Lima, Peru, with another formidable performance at the Costa Verde Sports Complex, where she dominated all the series and prevailed against 14 other runners. The podium now only had a change of places, but with the same actors. Brazilian Priscilla Stevaux finished with silver and another Colombian, Andrea Escobar, won the bronze medal.

The battle in the South American was much more even, however, the BMX Queen was favored by the start, as she was able to overcome the pressure of her rivals, mainly at the crossroads, and managed to pass first in front of the finish line.

“I close the year in the best way, in a quite important competition, facing the sea, in a venue that is spectacular. BMX is a beautiful sport, very familiar. I hope that more skills will continue to be developed in Lima because there is infrastructure to do so. I take good memories “, said Pajón

The triple Olympic medalist continues to add gold medals to her rich record, in this closing of a great year, where in addition to the title in the general classification of the World Cup ranking, the silver medal at the Tokyo Olympic Games, she also won the gold in the Pan American of Lima 2021.

In the case of the men’s section, the total Colombian dominance, Diego Arboleda once again celebrated in Peru, this time in the South American BMX Championship. The Valle del Cauca rider showed a great level in each of the series to confirm his good sporting moment that he is going through. The Argentine Exequiel Torres and the Brazilian Bruno Andrade took the silver and bronze medals, respectively.

In the contest, organized by the Peruvian National Sports Federation of Cycling, the national exponent Jean Paul Jaen also stood out, establishing himself as Pan-American champion, after standing out in the male cruiser category 45 – 49 years old.