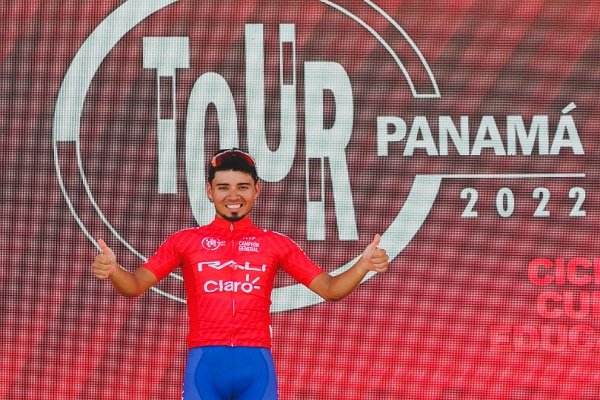 The Panamanian Bolívar Gabriel Espinosa of the Panama is Culture and Values ​​team, became the new monarch of the 2022 Tour of Panama, accumulating a time of 14 hours, 31 minutes and 24 seconds after 7 days of competition.

“Before starting the stage I was a little calm, since I knew it was going to be a day with a lot of rhythm, thank God everything went well and the team was able to control at all times to win the title” Bolívar Espinosa told us after finishing the stage .

“Undoubtedly we are very happy with this victory, staying with the Panama Tour trophy for another year. We are very focused on the next ones, in a couple of days we will travel to Baltimore for Maryland Cycling, an event that will have World Tour teams and that gives us much more experience”, added Espinosa, General Champion of the Tour of Panama 2022.

Espinosa pointed out that this result is the fruit of many years of work, and thanked the rest of the team members who allowed him to advance wearing the red leader’s jersey. In that sense, he signified the strategy followed to stop the Honduran López, who had a very short lead, and added that he hopes to defend the title in the coming years.

For the second consecutive year, the canal nation wins the laurels of this contest, since in 2021 it was won by Franklin Archibold, from the province of Chiriquí, who declined his participation due to injury.

The last stage on Sunday 28 was won by Carlos Samudio with a time of 2 hours, 05 minutes and 5 seconds, beating the Spanish Pol Hervas and the Panamanian Franklin Archibold, who entered the finish line with the same time.

The closed circuit in Cinta Costera 1 had a lot of fans, which began at 10:30 this Sunday morning, giving the flag to the H.A. José Luis Fábrega, who was in the company of the president of Fepaci, Vicente Carretero and the legend of Colombian cycling, Don Lucho Herrera.