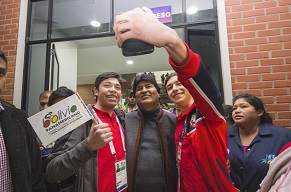 LA PAZ. The president of Bolivia, Evo Morales, said that the Cochabamba velodrome is the fastest in the world after registering several records during the Pan American elite cycling track.

“Very happy for the world and Pan American records of the Pan American Elite Track Championship that confirm our Cochabamba velodrome as the fastest in the world,” the Bolivian president wrote on his Twitter account.

In 2017, the venue organized the Pan American youth and, due to the good impression, the continental confederation of the discipline (COPACI) approved the Bolivian proposal to hold the contest in the first week of September. (Latin Press)