CAMPENAERTS BREAK THE RECORD OF THE HOUR 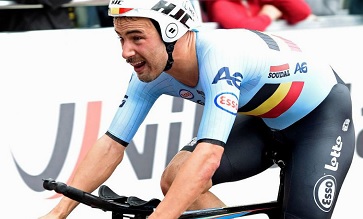 MEXICO. Belgian cyclist Victor Campenaerts beat the hour record on Tuesday, traveling 55.089 kilometers at the velocrome in Aguascalientes, central Mexico, to which he gave 221 laps.

Campenaerts took advantage of the good conditions of the track, with little air pressure, and always remained in the proper partials to overcome the record of Briton Bradley Wiggins, who in 2015 made 54,526 kilometers in London.

This Tuesday the Belgian needed little more than 10:57 minutes to complete the first 10 kilometers and when he reached the first quarter of the race he had maintained a speed of 54,975 kilometers per hour, higher than the one developed by Wiggins at the time.

After 30 kilometers Campenaerts made a partial nine thousandths over 32:39 minutes and with 18 seconds of advantage over the record, he concentrated on keeping pace.

Fatigue appeared before starting the last quarter of an hour. When passing by kilometer 40, at 43: 32.531, the cyclist had slowed down, however, he remained with a clear advantage over the limit established by Wiggins.

The emotion took hold of the attendees to see that, with 15 minutes to go, Campenaerts, from the Lotto Soudal team, had 49 seconds in his favor to achieve the goal, which in the language of cycling means a goal fulfilled if there is no greater setback

Stimulated by having the feat in his hands, he moved to more than 55 kilometers per hour during the last 10 minutes and improved the world record by 563 meters, a huge difference.

Born in Wilrijk, a district of Antwerp, the new world record holder of the time won last year’s bronze medal in the time trial of the World Championships in Innsbruck, Austria, and won the European title in the same specialty for the second year. consecutive.

For the record attempt, it was prepared a month in Namibia, at 1,800 meters above sea level, a height similar to that of Aguascalientes, and completed an acclimatization stay in Mexico for just over a week.

This Tuesday he used a high-tech bicycle with a plate of 61 teeth and 14 pinions that allowed him to bet on the force. (marca.com)