CANEL’S SPECIALIZED, PREPARED FOR THE RETURN TO COSTA RICA 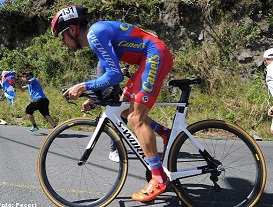 MADRID. The Tour of Costa Rica-Education Union 2019, to be held from December 16 to 25, will have 7 foreign teams, including the renowned continental team Canel’s Specialized of Mexico, which, under the direction of Juan José Monsevais, will seek to achieve the title of the 55th edition of the most important cycling event in Costa Rica.

Among the cyclists pre-registered for the test is the climber Óscar Sánchez, winner of Vuelta Costa Rica 2012. In addition, the Colombian was a mountain leader and points leader, with the GW Shimano team.

There will also be the Chilean Pablo Alarcón, who has managed to position himself on the podium on repeated occasions in his participation in Vuelta a Costa Rica.

The Mexican Mexican Juan Francisco Rosales, 19, who will debut in the 55th edition of the event, will not miss the event. He has won 2 stages in the Vuelta de la Juventud de México.

In the Tour of Costa Rica 2017, Eduardo Corte achieved first place in the tenth stage – known as the “President Circuit”.

The presentation of the 15 squads that will be in the Vuelta Costa Rica will be held this December 15 at 10 AM (local time) at the Center for Heredian Culture Omar Dengo, in the city of Heredia. (EFE)