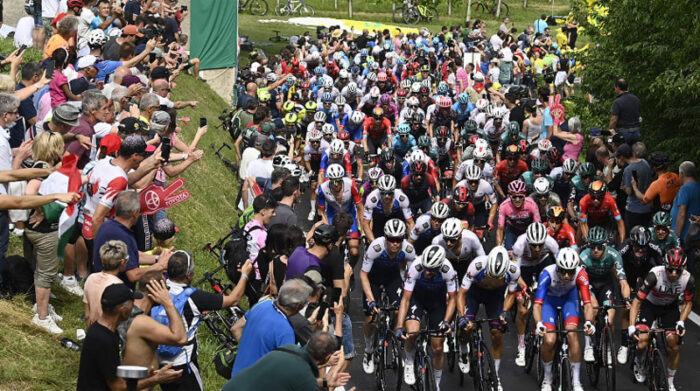 The Belgian Dries de Bondt won Stage 18 of the Giro d’Italia, in a sprint that featured the breakaway runners, while the Ecuadorian Richard Carapaz arrived with the main group and maintained the lead in the general classification for the fifth consecutive day.

Dries de Bondt, of the Alpecin-Fenix ​​team, signed his first victory in a Grand Tour, after three hours, 21 minutes and 21 seconds. He got into the breakaway of the day and worked with his fellow escapees to take the victory, the third for his team in the 105th edition of the Giro d’Italia.

Edoardo Affini (Jumbo-Visma) and Magnus Cort (EF Education-EasyPost) finished second and third, respectively, although the trio that took the podium staged a thrilling sprint, after a 156-kilometer journey between Borgo Valsugana and Treviso.

For his part, the Ecuadorian Richard Carapaz finished in 22nd place, 14 seconds behind the winner of the stage and kept the pink jersey for the fifth consecutive day. Jai Hindley, who is second in the general classification three seconds behind Carapaz, suffered a puncture and was relegated from the group.

The television showed the moment in which the Australian cyclist lost the wheel of the group in which he was traveling with the rest of the favorites. But that mishap happened within the last three kilometers.

The International Cycling Union created the “3 kilometer rule”, which states that if a runner has a mechanical problem or fall within the last three kilometers, he is assigned the same time as the group in which he was.

Therefore, although Hindley arrived about a minute after Carapaz, he received the same time and the distance between the two remains at three seconds.

The Giro d’Italia took a break as far as the mountains are concerned and faced the last stage that was flat and suitable for sprinters. As expected, the start of the stage was marked by a group of escapees, made up of Davide Gabburo, Mangus Cort, Edoardo Affini and Dries de Bondt.

All four runners did a great job, maintaining a grueling pace and pulling as much as three minutes out of the main field. So they got to the end.

Joao Almeida left the Giro due to Covid-19

The Portuguese Joao Almeida (UAE Emirates), fourth overall in the Giro, did not start in the eighteenth stage, after testing positive for Covid-19. Almeida (Caldas da Rainha, 23 years old), was in fourth place overall after Stage 17, 1:54 behind the leader, Richard Carapaz.

The Portuguese cyclist had lost the third place on the podium on Wednesday, May 25, to the benefit of the Spanish Mikel Landa. Almeida was the favorite for Sunday’s time trial in Verona.

This is the second retirement due to Covid in the 2022 Giro, after that of the Ecuadorian Jonathan Caicedo in the sixteenth stage.

Stage 19 of the Giro will take place on Friday, May 27, from Marano Lagunare to Santuario di Castelmonte, on a 177-kilometre route. The peloton will face three mountain passes, one of the first category and two of the third, as well as two intermediate sprints.

The main difficulty will be the ascent to Kolovrat, 10.3 kilometers at an average gradient of 9.1%, although the high end could also shake up the fight for the general classification.