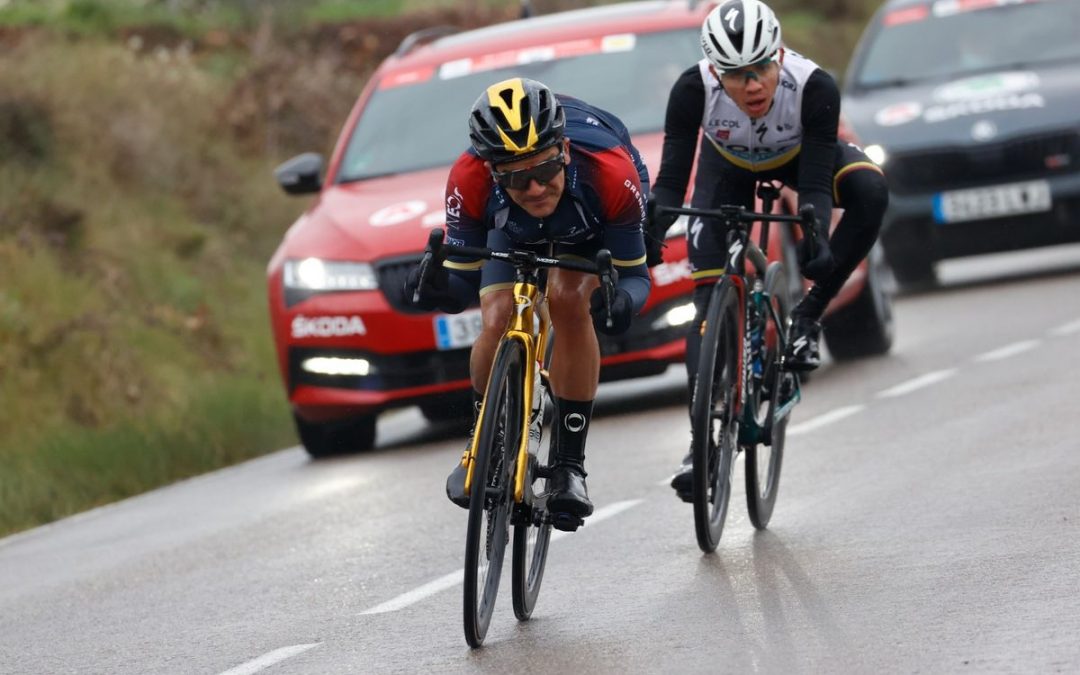 The Ecuadorian cyclist Richard Carapaz (INEOS) won this Saturday in the sprint in Cambrils (Tarragona) that he disputed with the Colombian Sergio Higuita (BORA-Transgohe), the new leader of the Volta a Catalunya after the sixth stage, an epic day in which the two escaped with 133 kilometers to go.

Higuita is now 16 seconds ahead of Carapaz and, except for surprise, in the final stage this Sunday in Barcelona both will play for the final victory of this Volta. The Portuguese Joao Almeida (UAE Team Emirates), who lost the lead, is third at 52 seconds and the Colombian Nairo Quintana (Team Arkéa), fourth at 53.

The Olympic champion and the Colombian champion reached the finish line 48 seconds apart from the group of other favorites in a leg-breaking 167.6-kilometre stage starting in Salou (Tarragona) marked by rain and a cold environment.

The day began with attempts to break away from poorly positioned runners in the general classification. One of those who tried it was the Australian Rohan Dennis (Jumbo-Visma), but his solo adventure ended before the first port of the day, the first category Coll de Llebres, with ramps of up to 15% slope.

From then on the favorites moved on, with Higuita and Carapaz opening a big gap with respect to the group of Colombian Quintana, the Dutchman Wouter Poels (Bahrain Victorious) and the Norwegian Tobias Halland Johanessen (UNO-X Pro Cycling Team), in addition to nine other cyclists.

Behind was the great group, with whom the stage began as leader, Almeida. Ayuso, Australian Ben O’Connor (AG2R) and Frenchman Guillaume Martin (Cofidis) also failed to break away.

In the descent, Plapp dropped from the breakaways (and would leave later) and the two chasing groups joined. In any case, the advantage of Higuita and Carapaz only increased, achieving 1 minute and 35 seconds at the top of the Coll de Capafonts, second category, located 105.4 kilometers from the finish line.

Three kilometers later they reached the first intermediate sprint of the day, in which Carapaz took three bonus seconds, Higuita two and Ayuso, the first to pass the chasing group, one.

The Ecuadorian and the Colombian continued to widen the gap, reaching 3 minutes and 33 seconds, despite the fact that the group of the rest of the favorites increased to 60 runners. The UAE Team Emirates was in charge of setting the pace to try to reduce the difference through the Spanish Marc Soler and the Portuguese Rui Costa.

But the terrain of the stage, with narrow and wet roads, did not favor the aspirations of the great group. The two escapees started the last climb of the day, the second category Coll de la Teixeta, with a lead of 2 minutes and 6 seconds, and reached its summit, located 28.5 kilometers from the finish line, maintaining the same gap.

Shortly after, in the second and last intermediate sprint of the day, Higuita took three bonus seconds, Carapaz two and Ayuso one.

The descent to Cambrils was frenetic, with Ayuso taking advantage of the chasing group, and another group led by Quintana and Poels also managing to leave behind the small peloton with Almeida. But, finally, they ended up grouping up without being able to catch Carapaz and Higuita, who played for victory in a very tight ending in which the Ecuadorian prevailed.

This Sunday the seventh and last stage of the Volta a Catalunya will be held, starting and ending in Barcelona and six climbs to the Montjüic mountain, which has a ramp, the one to the castle, with a drop of 19%. The face to face between Higuita and Carapaz promises new strong emotions.