CHRISTOFER JURADO CHAMPION OF THE VUELTA A CHIRIQUÍ 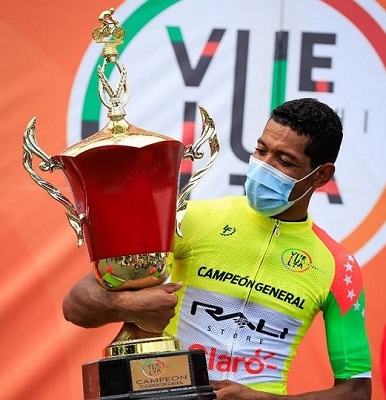 The Panamanian Christofer Jurado, from the Aernaval-Mapiex team, made official his individual general championship of the 40th edition of the Tour of Chiriquí on Saturday, which ended with a closed circuit in the city of David and which had a route of 91.9 kilometers ( 13 turns).

For Jurado, one of the most prominent Panamanian cyclists in recent years, it is his first title in the most important turn held in Panama, achieving a cumulative time of 12 hours, 42 minutes and 37 seconds. They were followed by the Costa Rican Gabriel Rojas at one minute and 20 seconds and the Panamanian Franklin Archibold at 3 minutes and 23 seconds.

The chorrerano cyclist became only the seventh Panamanian to win the championship this round.

Jurado’s victory is historic, since it is the first time that Panama has won this event two years in a row. The 2019 version was won by the Chiricano Franklin Archibold and now the Chorrerano Jurado does.

Precisely the last stage was won by Archibold from Chiricano in a final “sprint” at the finish line located around the Municipality of David with a time of 1 hour, 57 minutes and 50 seconds and beat Carlos Brenes of the Costa Rican team and Fernando Ureña from the Caminos Omar team, all with the same time

The Isthmian cyclist, who is qualified for the Tokyo Olympics, dominated almost the entire turn, placing first in the individual overall in the first stage. He lost the lead in the second round but regained the top in the third race and did not lose it in the rest of the sporting event.