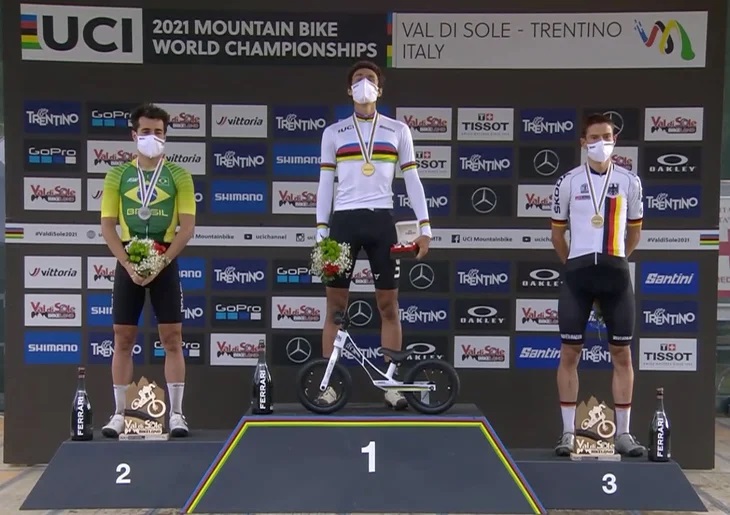 Christopher Blevins has just put his name in the history books of mountain bike racing by winning gold in the elite world championship in short track cross-country racing in Val di Sole, Italy, where Brazilian Henrique Avancini He also added a silver medal in his own specialty.

Blevins sped up on the final lap to dodge German driver Maximilian Brandl, then held off Brazilian star Henrique Avancini in the final sprint to claim the rainbow stripes.

“This is the sweetest race ever. I grew up in my hometown with the weekly short track (Durango, Colorado) on Wednesday nights, and it was a special way to grow up. It is a special kind of race: you are there with all your friends on a dirt track. It’s the same thing that has been brought to the World Cups and now to the world championships, and it’s amazing to win this, ”Blevins said at the finish line.

In fact, short-track cross-country racing has been popular in the United States for the past two decades, and has recently become a mainstay on the UCI World Cup circuit.

The format sends riders on a short dirt course of about a kilometer that often incorporates climbs, descents, and sometimes even BMX-style jumps and berms.

In his post-race speech, Blevins acknowledged America’s long drought in men’s cross-country racing. “We have wanted rainbow stripes for men for a long time. It has been a long time since the United States was in the rainbow stripes, ”said the winner.

The thrilling finale came after Blevins had a cool, calculated run. The twisty, winding route took segments of the four-way course, and included two gritty climbs and two descents, followed by a long grass straight to the finish. Blevins rose to the leading group alongside Avancini, Brandl, Lndrej Cink from the Czech Republic and Alan Hatherly from South Africa.

Avancini made multiple accelerations in the group, but the most important move came on the penultimate lap, when Brandl attacked from the group and seemed to open the margin of victory. Behind, Cink and Avancini picked up the pace, but the German kept a six-second gap heading into the final lap.

Increased pace from behind eventually brought Brandl back, and Avancini then attacked in the final clip in an effort to get the best position for the sprint.

Blevins holds a United States national title in cyclocross racing, and was a professional road rider before participating in mountain biking full time. He got off the saddle and passed Brandl and Avancini as the trio navigated a few twists and turns before the final on the right.

Blevins added the statement to his other medal loot. On Wednesday he won a silver as part of the United States mixed relay team. He said the racing helped him focus on his big goal: the short track.

“I went into this week wanting it to be a little unique and fun. Five days of racing in a row is a lot, but this one put my legs under me. This was the focus of the entire week, and achieving it is incredible, ”said Blevins.