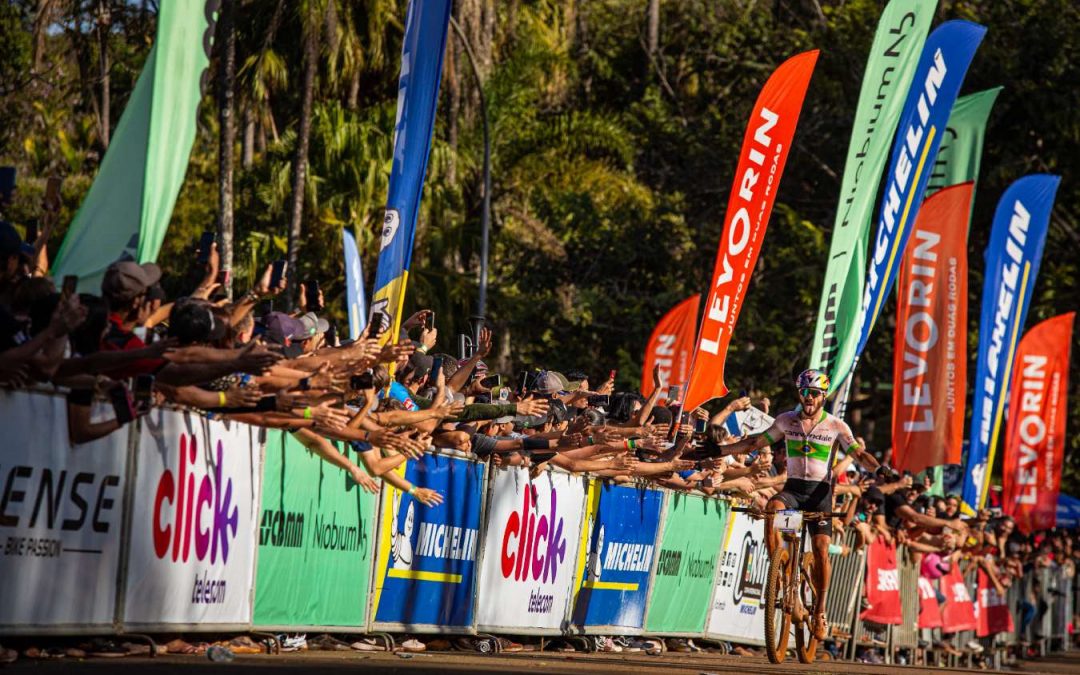 The cyclists Raiza Goulao and Henrique Avancini confirmed their favoritism, after winning the Short Track on Saturday (June 25), and added 110 points in the UCI Olympic and world rankings with their sights set on the Paris-2024 Olympic Games at the Michelin International Mountain Bike Cup in Araxá, Brazil.

The cyclists who entered the track during the third and final day of the Araxá stage met the expectations of the fans, who filled the facilities of the Grande Hotel Termas de Araxá to follow the Olympic Cross (XCO) races.

In the two main disputes of the day in the event presented by the CBMM, the super elite women and men, Raiza Goulao and Henrique Avancini repeated the feat of the previous day, when they won the Short Track (XCC).

In the last dispute of the 19th consecutive edition of the Araxá race at the CIMTB Michelin, Avancini was proclaimed champion for the ninth consecutive year in the super elite stage. He thus added 15 victories in the most traditional stage of Latin American cycling (he won another six occasions in the basic categories).

After finishing the race, Avaça -as he is affectionately called- valued his relationship with the place that, according to him, was probably where he competed the most in his race. “Today I won for the ninth time in a row in the Araxá elite. This is very difficult, it is an achievement that I am very proud of.

“Anyway, there were so many great fights here and I always managed to find strength somehow to get the victory. Sometimes I feel great, other times not so fit. I have competed sick. But being in Araxá gives me extra strength to seek victory with all my might”, praised Avancini.

The XCO race repeated the XCC scenario, with a good dispute between the main favorites, however, it was decided earlier. While the eve of the race was set a few meters from the end, in the Olympic modality Avancini was undermining his rivals round after round, to win with some clearance, in 1h 25min 46, an advantage of 1:15 for the runner-up, Jose Gabriel Marques.

Among the women, the story was also very similar to the previous day. Once again, Raiza Goulao and Hercília Najara got ahead of their rivals. However, the race had Raiza building up her lead lap by lap. Hercília was still rehearsing a recovery, but with a puncture she ended up seeing her chances of victory vanish.

“I’m really happy. I’m very proud of the victory and that also motivates me to raise the level of the women. Congratulations to Hercília, because we managed to stand out. Right at the beginning she came with me. It was a very good test. It’s nice to ride with a elite athlete in the descent. And it was good to analyze it, study and wait for the right moment to make a difference and stay in the lead”, said Raiza.

“These are very important points for me, a hors class (HC) race here in Brazil, there are few in the world. And that gives me extra motivation. Taking the lead being the best Brazilian in the UCI. This shows why I got a tattoo, the phoenix, rising from the ashes. It is my story and I thank everyone who is with me. This victory, I think, is the beginning of a new era for Raiza”, reflected the champion.

Vice-champion for the second consecutive day, Hercília evaluated her career in the Olympic Cross. “The delivery of this circuit is very complete. You have to have strength, you have to have power, and I like it a lot, it’s my favorite circuit. I wanted to do my test regardless of my opponents. I found a very good pace on the first, second and third laps. Raiza ended up opening in the third and I started to take the distance that she managed to open. Then I had a flat tire and stopped on lap four to change. Afterwards, I couldn’t close that difference. But I am very happy with the result and it was worth it”, said Hercília.