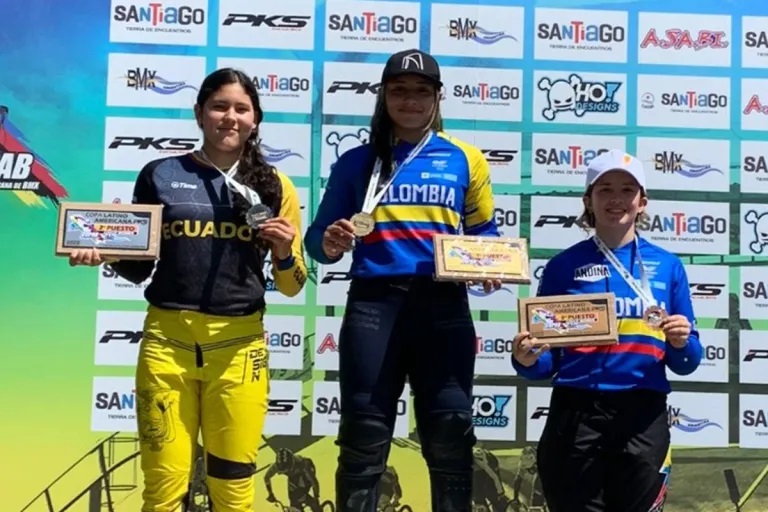 The Continental BMX Championship ended in Santiago del Estero, Argentina, in which the Colombian Andean National Team had an outstanding performance by demonstrating its dominance in the competitions held during the weekend in the Championship categories, in which it achieved nine of the 12 titles that were disputed during the two days of competition.

The Colombians won four golds, one silver and three bronzes in the framework of the South American Championship or Latin Cup, which was played on Sunday, with domination of the three women’s categories by Mariana Pajón (elite), Valentina Muñoz (Sub- 23) and Sharid Fayad (junior), while in men the gold was achieved by Santiago Santa (junior).

The silver medal was achieved by Gabriela Bolle, in elite, while the bronzes came through Mateo Carmona García (elite), and Juan Pablo Chaparro and Isabela Carranza, in junior.

An impressive balance of the national team that competed in Argentina with the support of the Colombian Cycling Federation, the Ministry of Sports and the Colombian Olympic Committee, since the four gold medals on Sunday were added to those achieved on Saturday at the Pan-American Championship, in which Mariana Pajón, Valentina Muñoz, Sharid Fayad and Santiago Santa had obtained first place in their respective categories, in addition to the triumph of Diego Arboleda, in elite, and the bronze of Isabela Carranza in junior.

Fourteen medals that ratify the Colombian Andean BMX Team as the best team on the continent, and that motivate the group led by Germán Medina to face the next four rounds of the UCI BMX World Cups, which will take place in Bogotá, on the 24th and September 25, and October 1 and 2.

These were the results of the Championship categories, in the BMX South American Championship or Latin Cup played this Sunday: