Colombia celebrates its fifth title in the Volta a Catalunya 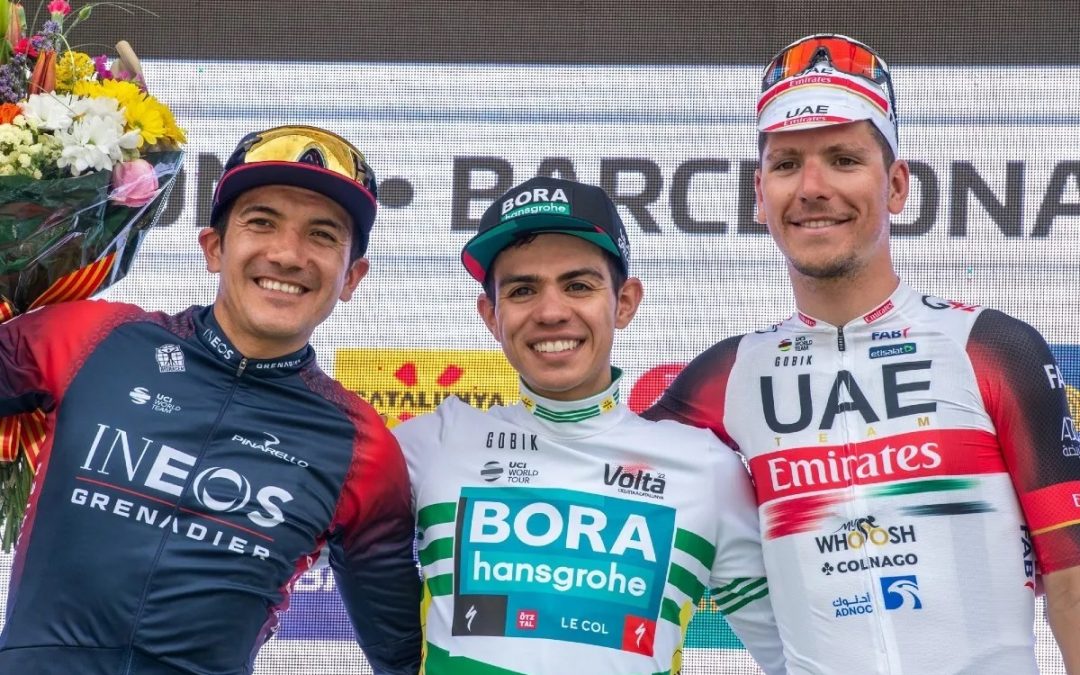 Sergio Higuita (Bora-hansgrohe) withstood the attacks on the traditional Montjuic circuit and was proclaimed the new champion of the Volta a Catalunya, something four Colombians had previously achieved: Álvaro Mejía (1993), Hernán Buenahora (1998), Nairo Quintana ( 2016) and Miguel Ángel López (2019).

The rider Andrea Bagioli of the Quick-Step Alpha Vinyl won the seventh and last stage of the Spanish race, traced over 138.6 kilometers around Barcelona. The Italian took the victory in a reduced package ahead of the Hungarian Atila Valter (Groupama-FDJ) and the Spanish Fernando Barceló (Caja Rural Seguros RGA).

The Colombian Nairo Quintana (Team Arkéa), acclaimed by his compatriots in Barcelona, ​​was left with honey on his lips, since for a single second he could not get on the final podium of the Volta. The best Spaniard was Juan Ayuso (UAE Team Emirates), fifth, 1 minute and 8 seconds behind the winner.

The general by points was won by the Australian Kaden Groves (Time BikeExchange), winner in the Perpignan stage; Higuita also won the mountain jersey and the best youngster; and the team classification went to the Bahrain Victorious.

While the runners waited for the traditional ribbon cutting before starting the stage on the María Cristina avenue in Barcelona, ​​Higuita and Carapaz talked in a relaxed manner, once again showing a good relationship after the heroic adventure they experienced on Saturday, when they had a overturned the classification with a breakaway that they forged 133 kilometers from the finish line.

Higuita still had four teammates from Bora-Transgohe before facing the last stage and Carapaz only had two. But both were very important: the Spaniards Carlos Rodríguez and Jonathan Castroviejo.

During the first section of the stage there was a succession of attacks to find an escape. The two teams that fought most insistently for this objective were UAE Team Emirates, led by Almeida and Ayuso, and Euskaltel Euskadi.

This devilish pace caused the peloton to split into two, forming a first group of 27 runners in which all the first places in the general slipped except Nairo Quintana and the Dutchman Wouter Poels (Bahrain Victorious). But the work of Team Arkéa managed to neutralize the breakaway and they regrouped shortly after.

The one who did not manage to rejoin the group was Poels, who had suffered a mechanical problem on his bicycle and chose to leave with more than 100 kilometers to go, according to his team, due to “stomach discomfort”.

Finally, the breakaway of the day was originated, formed by 12 cyclists. Among them were the Spaniards Marc Soler (UAE Team Emirates) and Jesús Herrada (Cofidis) and they managed to open a gap of 1 minute and 23 seconds.

With 47.1 kilometers to go, the finish line was passed for the first time and a few meters later the Montjuïc pass began, in the second category, which was climbed six times. Although it has a slope of 4.6%, it has a very hard ramp, that of the castle, with ramps of up to 19% slope. Then the escapees had a 43-second advantage over the peloton.

But already in the first lap the Frenchman Quentin Pacher (Groupama – FDJ) and the Dutchman Steven Kruijswijk (Jumbo-Visma) stood out alone and at the beginning of the climb of the second the UAE Team Emirates team began to force the pace in the big group.

Although the race did not break until Carlos Rodríguez (INEOS) forced the machine in the fourth preparing Carapaz’s attack, which happened in the final part of the fifth climb to the castle, with 13 kilometers to go.

Higuita held on to her wheel and never gave up. Nor with the attack of the surprising Tobias Halland Johanessen (UNO-X Pro Cycling Team), who finished seventh overall. The group was reduced to seven runners, including Almeida and Quintana, and neutralized the escapees.

But he regrouped on the descent and everything remained to be decided on the last lap, in which Carapaz no longer had the strength to try another attack. In fact, he gave in along with Quintana on the climb, when Ayuso once again dynamited the group until it was reduced to five members: Higuita, Almeida, Johannessen, en O’Connor (AG2R) and Ayuso himself.

Thus ends a Volta that has not lived a single day of tranquility, offering a first-rate daily show, despite the wind and cold that there were in several stages, and that began with the enormous scare of the Italian’s cardiac arrest Sonny Colbrelli (Bahrain Victorious), who is now happily recovering in his country.