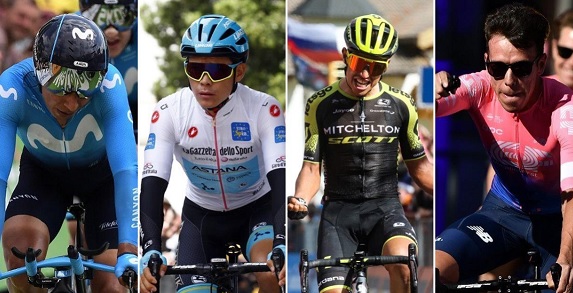 BOGOTÁ. Cycling is undoubtedly the sport that has given Colombia the most joy in recent years and shows that this is the most recent update that the International Cycling Union did in its individual rankings, by teams and by nations.

To the recent titles of Egan Bernal in the Tour de France and Iván Ramiro Sosa in the Tour of Burgos is added the good performance, in general, that Team Medellín has had in the competitions in the American continent.

With respect to the individual ladder, Egan Arley Bernal, the first Colombian winner of the ‘Grande Boucle’, leads with 2726.75 points. The second place is occupied by Miguel Ángel López of the Astana team with 1828 points. Ecuadorian Richard Carapaz, champion of the Giro d’Italia, is third with 1655 units.

As for teams, the Colombia Team Medellín team is for the first time in its history the first place owner with 1453.16 points.

The Antioquia team has shone in 2019 to achieve 12 stage victories distributed as follows:

In second place is the American Rally UHC Cycling squad with 1081 points and third is the Canadian Floyd’S Pro Cycling team with 1022 points.

In the ranking by nations, Colombia is the country with the most points by accumulating 10077.88 with points, in second place is Canada with 3216.71 points and third is Ecuador with 3060.64 units. (antenna2.com.co)