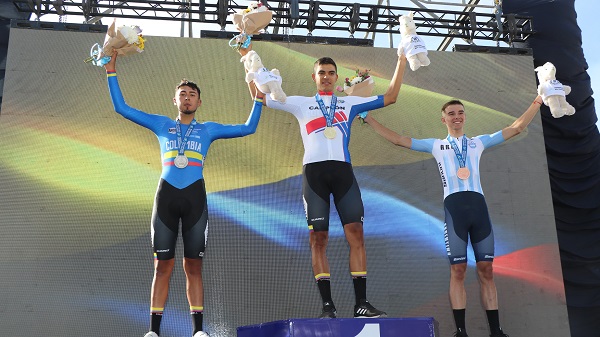 The Colombian Juan Manuel Barbosa increased his rank, by becoming the Pan-American time trial champion, in the U-23 category, during the second test that was held on the first day of the San Juan 2022 Pan-American Road Race, in which his team also climbed to the podium. compatriot Johan Porras and Argentine Adrián Etcheverry.

After having managed to be monarch in his country, Barbosa climbs the continental ranking with this gold, achieved after stopping the clocks in 35: 38.07 minutes after completing the 31.6 kilometers of the partial.

The competition was not wasted. There were fifteen riders who were measured on a route that had the starting and finishing point from the Punta Negra pier. With the clean and jerk in the first levers, the batch of the youngest of the male branch found the slide to accelerate the pulses.

The midpoint of the mileage marked the trend of those who got into candidates in the distance. With the passage of the Colombian Barbosa, just four seconds ahead of his compatriot Porras, they showed those who traveled with a good cadence, lowering the 17-minute barrier, in which a good number of cyclists were found. Among them Arián Etcheberry (ARG), Lenin Montenegro (ECU) and Brayan Obando (ECU).

In the final stretch, the Colombian time trial champion kept up the pace, dominating the ascent of the Punta Negra Dam snails and widening the lead over his rivals. In this way, Juan Barbosa began his path to gold. The wait, due to the definition of the locations, were rearranging the positions in the general classification, but without taking away the glory that he achieved in San Juan.

After the podium ceremony, the three members of the podium left their opinions of the time trial.

1.-Juan Manuel Barbosa (Colombia): “This victory is very important for all of us, I am happy to have achieved it. For a time trial you have to know how to suffer in order to later enjoy and the section of the climb to the dam was very hard. The whole team is happy and we are already thinking about what is coming tomorrow, Saturday” closed the new U23 Pan American time trial champion.

2.- Johan Fernando Porras (Colombia): “We have worked hard, we tried to make a perfect time and what we gave came out, which leaves me satisfied with the 1-2 we did. The circuit seemed difficult to me, with very technical sections and the climb to the dam leaves one clean. I am very happy with the medal and now to think about working with the team on Saturday to try to achieve the victory we long for”, concluded the silver winner in San Juan.

3.- Arian Etcheverry (Argentina): “This is a very positive result; more than happy with what was obtained, knowing that we are doing a Pan-American championship and that Colombia was a very strong candidate, the fact of being close to them leaves me very calm, with the certainty that there was a well-done preparation. Since the Argentine championship he had been working for this, especially in the time trial”, said the Argentine representative.