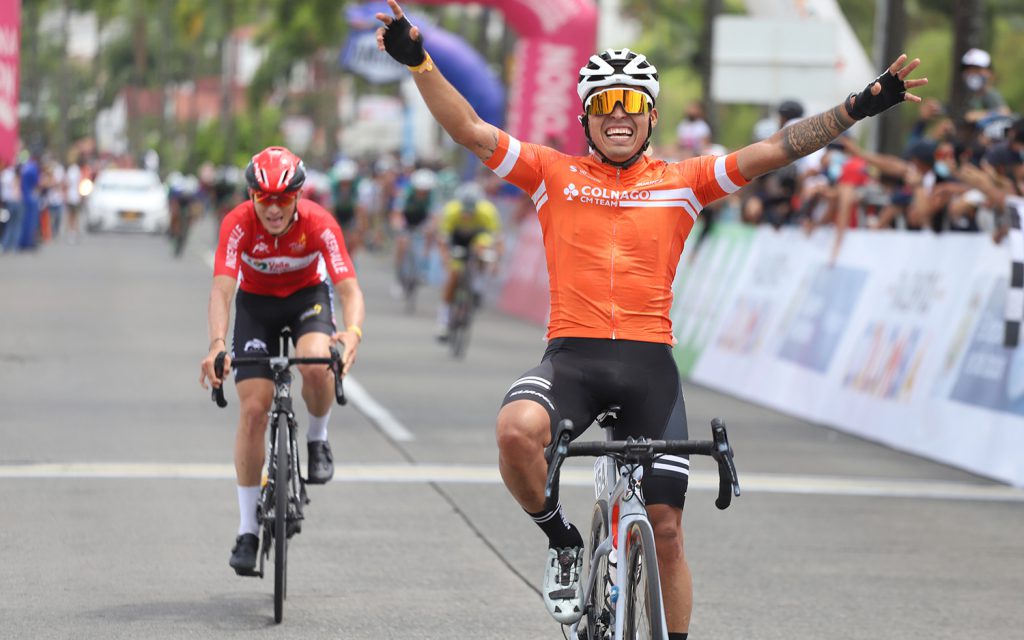 Like a true cycling festival, the national road championship of Colombia can be valued, which since last Thursday has been held with great success and which will close this Sunday with the men’s road event, elite category.

Juan Esteban Guerrero, king of the fund in the Under 23 category

Juan Esteban Guerrero (Colnago-CM) from Cundinamarqués won this Saturday with the victory in the long distance test of the sub 23 category on the penultimate day of competition of the National Road Championships, Pereira 2021.

In the three laps of the circuit there were several escape attempts, but none managed to reach a successful conclusion, before a main group already reduced to its minimum expression and aiming for a final with the compact group so that the specialists in the packaging disputed the victory.

A group of approximately 16 runners were in front in the last kilometers for a great shot where the strongest was Juan Esteban Guerrero, who crossed the finish line with a time of 3 hours, 39 minutes and 13 seconds, hanging the gold medal and dressing as the new national champion of the category sub-23. Everth Gutierrez (Valle del Cauca Selection) and Elkin Soto (Strongman Bicycles) finished second and third, respectively.

In an authentic elimination test, the runners of Colombia Tierra de Atletas-GW, Lorena Colmenares and Lina Hernández won the National Road title in the Elite and Sub 23 categories this Friday in the city of Pereira.

In the Under 23 category and for the second consecutive year, Lina Hernández won the victory, beating Camila Atahualpa (Sistecrédito-GW) and Erika Botero (Colnago CM Team) who completed the podium.

Colmenares affirmed that she trusted her strength and the type of route on which this test was held. “It was quite a tough test, a very demanding course. I knew it was an arrival that suited my conditions and in the end we were victorious ”.

She appreciated the great work of her team. “I trusted my team until the end, they also trusted me and in the end we won the gold medal in the National Championship, which was a dream I had thanks to the work they did.”

Walter Vargas, the fastest in the chrono

With the individual time trials, the National Road Championship of Colombia began last Thursday in Risaralda, which ends this Sunday, June 20.

In the men’s elite category (38.3 kilometers) Walter Vargas of Team Medellín won with a time of 43 minutes and 20 seconds, taking more than a minute away from Diego Camargo of EF Education Nippo. The podium was completed by Andrés Camilo Ardila of UAE Team Emirates at 2:14

In the case of the ladies (20.7 km), the one who dominated the test was Serika Guluma of the Colnago CM Team, who stopped the clock at 27 minutes and 31 seconds. In second place, just eight seconds away, was Ana Sanabria from Colombia Tierra de Atletas, while Ana Fagua from Indeportes Boyacá Avanza was third.

The Colnago CM Team took another triumph in the individual time trials with Víctor Ocampo in the men’s Under 23 category. The rider with the number 152 registered a time of 39:32 minutes, only 13 seconds better than that of Anderson Arboleda of EPM Scott, while Rafael Pineda, partner of the winner, was third at 27 seconds.

In the women’s Sub 23, Lina Hernández from Colombia Tierra de Atletas won with a time of 27:51. She was escorted in the awards by Erika Botero from Colnago CM Team and Lina Rojas, partner of the winner, at 30 and 57 seconds, respectively.