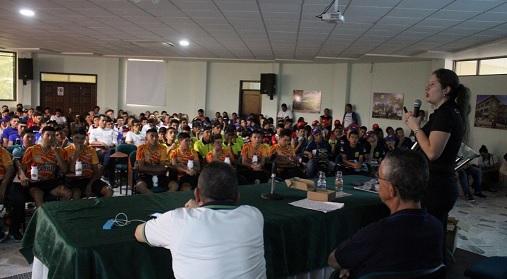 BOGOTÁ. The Colombian Cycling Federation deeply regrets the announcement of the UCI, according to which two new cases of doping have been detected involving the athletes Alex Norberto Cano, of the continental team Coldeportes Zenú, for anomalies in their biological passport, and Juan José Amador Castaño, belonging to Team Manzana Postobon, notified with the substance Boldenona.

According to Article 7.12.1 of the Anti-Doping Regulations, the positive of two athletes (the previous Wilmar Andrés Paredes Zapata) in a period of 12 months, generates a sanction for the team between 15 and 45 days that will impose the disciplinary commission of the UCI.

We reiterate the work that has been leading the Colombian Cycling Federation, through the implementation of prevention campaigns against doping, through lectures and delivery of educational material on a schedule that is being developed in all regions of the country, which is reinforced by conferences preventive measures against doping, with a medical and legal focus, in the technical congresses held before the start of the training events in our country (Vuelta del Futuro, Vuelta del Porvenir and Vuelta de la Juventud).

To the above, it is added that jointly with Coldeportes Nacional has been financially supported the conduct of doping controls, inside and outside of competition in most of our events, as happened with the recent Vuelta de la Juventud, to which it is added to have assumed the transport and analysis of the samples that are sent to laboratories certified by the UCI.

There is no need to add that Fedeciclismo has as a priority the frontal fight against doping, which is why as the institution that runs cycling in Colombia, it will always lead all efforts aimed at attacking this scourge in our sport, which has given us so much, and that now he is harmed by bad procedures of some athletes.

We reiterate that our institution, sponsors and leaders will never agree with these practices, because we will always ensure a clean and ethical sport in which we will not tolerate bad procedures, and we will always be willing to collaborate with the decisions made by the UCI as governing body in the world.