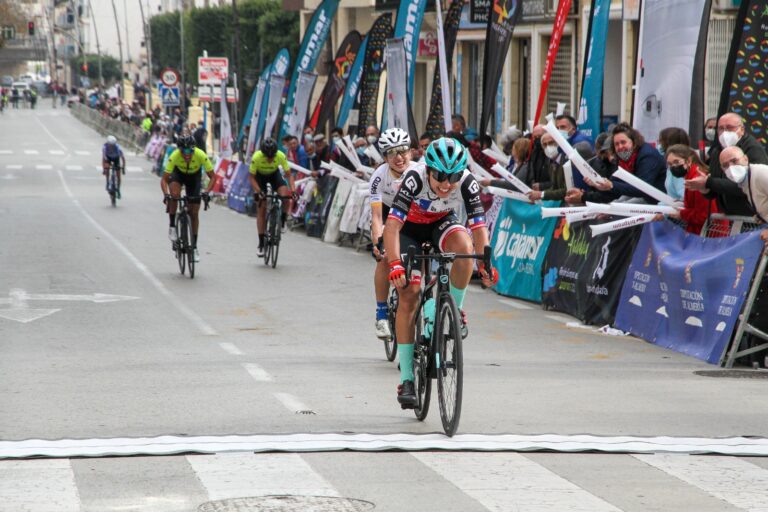 The Chilean Aranza Villalón, of the Eneicat RBH Global team, has inaugurated this Saturday the winners of the Women Cycling Pro Costa de Almería Trophy, a national professional event that has been released in the Almeria province under the organization of Total Sport Mediterranean, with a route of 148 kilometers between Campohermoso (Níjar) and Cuevas del Almanzora.

Villalón finished in first position, with a time of 4 hours, 15 minutes and 5 seconds, ahead of the Cypriot Antri Christofouru (Farto) and the German Nadine Gill (Sopela), a breakaway by six runners that took place in the final stretch of the race, when the peloton broke up on the last mountain pass of the day, the Alto de la Cuesta del Capitan. Until then, the race had been calm and uneventful along the Levante Almeriense roads.

As soon as the race started in Campohermoso, the cyclists had to face the first flying finish line in Villa de Níjar, where the French Agnieta Francke (Sopela) passed first, and the Alto de Lucainena de las Torres, first category, with a climb of more than ten kilometers. It was crowned first by Nadine Gill, ahead of the Greek Varvara Fasoi (Eneicat RBH Global) and Antri Christofouru, who would go first through the sprint of Lucainena de las Torres.

The road immediately climbed again, with the second mountain pass of the day, Collado de La Manoleta, in the fourth category, also in the municipality of Lucainena de las Torres, where Nadine Gill was once again the strongest. In the flying goal of Sorbas, the first would be Tania Calvo, from Laboral Kutxa-Fundación Euskadi.

On the way to Los Gallardos, a small group was formed in the lead with four runners who did not survive more than a few kilometers, enough for Marta Romeu (Team Farto) to pass the special sprint in first position passing this town. For Antas’ flying goal, Tania Calvo would repeat in first position.

The peloton circulated calmly along the Levante Almeriense roads and everything indicated that the race, if broken, would do so on the last mountain pass. Before then, the cyclists passed through Cuevas del Almanzora for the first time in the direction of San Juan de los Terreros (Pulpí), where the last flying finish line awaited them, which would decide the winner of this classification, with swords held high between Tania Calvo and Agnieta Francke.

The rhythm changed, as expected, at the Alto de la Cuesta del Capitan. There, the peloton began to stretch, with six riders remaining in the lead, Antri Christofouru crowning the pass in first position and also passing through the Guazamara special sprint in first position, to take over the general of this category.

The six leading cyclists arrived in their breakaway to the Cuevas del Almanzora avenue in Barcelona, ​​where Aranza Villalón took the victory, beating Antri Christofouru in the sprint. Third was Nadine Gill, two seconds behind.

At the finish line, the winner stated that she was “very happy, because it is the first time I have been in Europe, and to represent Eneicat”, as well as “grateful to the organization, because the race has been spectacular, they have taken good care of us to all cyclists and because they maintain women’s cycling in this way, where we are more and more”.

Villalón added that “all the teams have thought the same thing, to stay calm and break through the last mountain pass, and that’s how it has been”.

The complementary classifications have been for Sopela, that of teams; Nadine Gill the mountain, Tania Calvo the flying goals, Antri Christofouru the special sprints, Ariadna Gutiérrez the combativeness and Azahara Pozuelo the best Andalusian.

The Women Cycling Pro Costa de Almería has had the institutional sponsorship of the Junta de Andalucía, the Provincial Council of Almería and the municipalities of Níjar and Cuevas del Almanzora, as well as those of Lucainena de las Torres, Sorbas, Los Gallardos, Antas and Pulpi.

The official vehicle, in addition to sponsoring the combativeness, has been Hyundai Almerialva; Cajamar has sponsored the Mountain Grand Prix; Bitprom the flying goals and López Urrutia the best Andalusian cyclist at the finish line.

The ribbon cutting at the start of the test was carried out by the Andalusian Government’s Education and Sports delegate, Antonio Jiménez Rosales, and the mayor of Níjar, Esperanza Pérez.

At the awards ceremony they were accompanied by the delegate of Education and Sports of the Junta de Andalucía, Antonio Jiménez