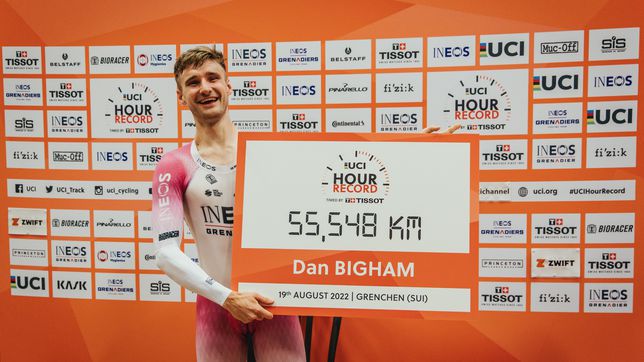 He had already been predicting for a week. It had been announced that Dan Bigham would try to break the hour record on track at the Tissot Velodrome in Grenchen, Switzerland this Friday, August 19. The British had to overcome Victor Campenaerts mark. The Belgian had an extremely difficult mark to beat, a mark that consisted of traveling a total of 55,089 km on the track in one hour.

However, the Briton was willing to break that mark and has managed to improve it by only 500 meters more than Campenaerts. The mark that he has managed to do in one hour Bigham has finally been 55,548 km. A brand that will be very difficult to beat until another cycling beast capable of performing this type of performance comes out.

Although Bigham’s career has been very complicated and at times it seemed that he was not going to break the record. He himself cataloged his career as “epic” and “crazy”. “Actually, it’s been really good. My best pace per hour without a doubt. I was a bit far from the ‘split’ in the first half. It was a little daunting because I’ve never ridden at that hourly pace before. It was a bit crazy, quite epic”, commented the Briton as soon as he finished the race.

A superb performance and it is that to carry out this type of races it is necessary to have a mental and athletic capacity within the reach of very few. “An incredible support from Ineos, that has been the big step towards the change. Not only the equipment and the CDA. It’s been all the execution, the psychology. All the thermal state, nutrition, training sessions. All of this has been a step forward, that and the support that I have had around me has been key”, declared the cyclist after achieving the record.

Despite having a good pace, the Ineos cyclist himself doubted if he was going to manage to beat the Campenaers mark. “That’s what scares you. You have the pace but you don’t have the distance. I actually had a bit of a shake in my head. Just after half. But in the end it was easier than I thought, I had it in control. In my head, I was only 20 minutes from the finish and I pushed a little bit more,” added Bigham.

In this way, Dan Bighman becomes the new holder of the track hour record and adds it to his British hour record, which he already had with a mark of 54,723 km.