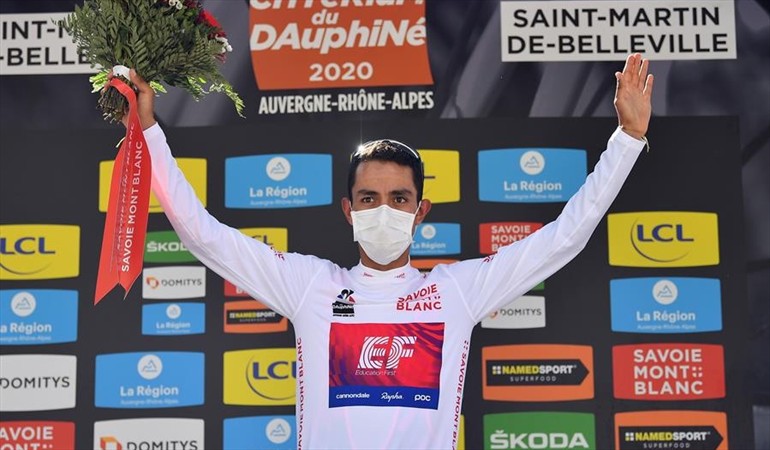 The Colombian was the best in a race of attacks and counterattacks that started without Roglic. Kuss, in the absence of his boss, signed the last stage.

The 2020 Dauphiné became a shredder for aspiring Tourists, which starts in just 13 days. If on Saturday the winner of the yellow in 2019, Egan Bernal, did not start on Saturday due to back discomfort, this Sunday the one who was solid leader of the race, Primoz Roglic, did not start, also as a precaution after his fall from the day before, which left him very dizzy and with multiple blows and injuries.

Steven Kruijswijk and Emanuel Buchmann, third and fourth of the last Tour, left on the fourth day with a dislocated shoulder and deep abrasions, respectively.

And while the participation of Bernal and Roglic seems assured (although the pace of their preparation slows down), the evolution of the injuries of Kruijswijk and Buchmann will determine their presence in the Grande Boucle.

The mishaps did not diminish in the fifth stage: Nairo Quintana retired after suffering pain in his knee (“The one affected in my accident in Colombia”, he said) and losing more than five minutes with the rest of the favorites at the time of his abandonment , and Mikel Landa disconnected and gave up more than 19 ‘after suffering cramps and back discomfort. But fainting and falls are part of cycling.

Thibaut Pinot, who inherited the leadership from Roglic (although he did not put on the jersey), ended up totally fused in the defense of his first virtual place after a day of attacks and counterattacks along eight ports.

He had to settle for second place. Daniel Felipe Martínez, second at the finish, achieved his first title in a round of the World Tour at age 24. The Colombian knew how to manage his forces and go on the offensive when his rivals faltered. Guillaume Martin, third, completed the drawer.

Sepp Kuss, Roglic’s squire in the Jumbo, took advantage of his good form and the freedom that the absence of his boss gave him to win at Megeve.

He achieved the sixth victory of a promising career as a professional, which in 2019 already shone in the Vuelta thanks to his triumph at El Acebo. Martínez and Kuss (25) are the future.