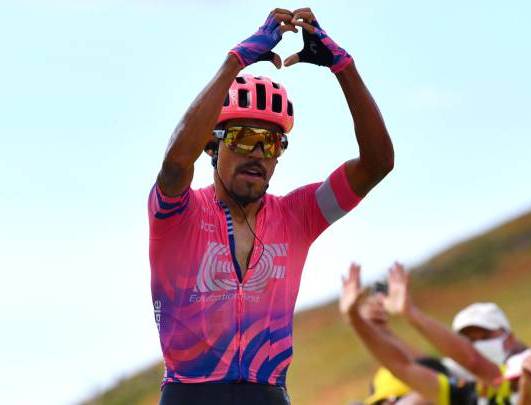 Colombian Daniel Martínez won this Friday in the thirteenth stage of the Tour de France, with the goal at the top of the Puy Mary, by beating German Lennard Kämna on the finish line, the two strongest of a long escape that marked the day .

The recent winner of the Dauphiné, 24 years old and contesting his second Tour, got his first win on a grand tour. The day was very busy, from the beginning a large escape began to take place, first with five cyclists and then with 17.

The escapees did their thing. They were in charge of getting and getting more differences on the lot of the leader, Roglic, in which the Colombians were.

At kilometer 82 there was a fall, from which Bauke Mollema came out badly, who was forced to leave the competition. In addition, Nairo and Romain Bardet fell, but later they reached the peloton. The Frenchman felt a blow to his right side. At that point in the race the pointers had an income of more than eight minutes.

Ahead in the leading pack they moved. Schachmann and Powless jumped and carved a gap, 23 km from the finish. And five kilometers later. Schachmann released Powless and he’s the pointer. Lot at 9 min 25 s, led by Ineos.

Daniel Martínez quickened his pace in the middle group. Behind, Ineos maintains the strong rhythm in the leading group. Martínez and Kamna, who did not help the Colombian because his teammate is ahead, decreased the advantage, it was only 36 seconds 11 km from the goal.

Carapaz stepped forward to speed up the pace and Bardet and Martin, fourth and third overall, respectively, stayed behind. Nairo, Urán and López rose in the general classification.

The last effort made by the Colombian cyclist was very big and in the end he could only celebrate in the best way.

TOP 8 OF THE INDIVIDUAL GENERAL