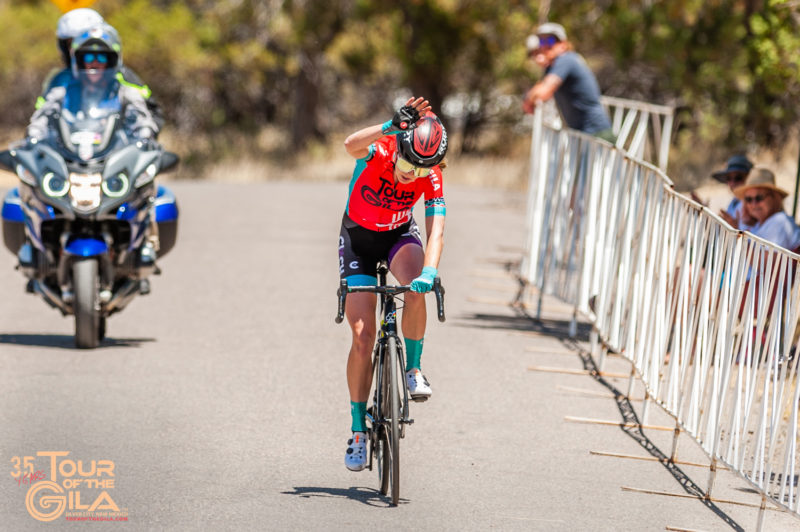 Lauren De Crescenzo (CINCH Rise) left no questions on the table Sunday at the UCI Women’s Tour of the Gila when she snagged the overall red leader’s jersey, relinquishing the Gila Monster stage win to Emily Marcolini (3T/Q+M Cycling Team) from Canada.

De Crescenzo put nearly a minute into her closest competitor Krista Doebel-Hickok (EF Education-TIBCO-SVB) to secure the win after a rollercoaster week of lead changes and crashes.

“Oh my god I feel amazing; I feel so amazing,” De Crescenzo said. “Six years ago, I was in a rehab center re-learning how to walk and talk, and now I win the biggest UCI stage race in the U.S. I never thought this could happen. Learning how to walk to winning the Gila, it’s insane, it’s totally insane.”

Marcolini, who lost the overall lead at Redlands Bicycle Classic last week, said she wasn’t counting her chickens before they hatched when she rolled up to the line.

“I didn’t really have a ton of expectations,” Marcolini said. “I was just hoping to snatch up a few more QOM points and move up a bit in that competition. My hope was a top-three placing, but I never actually thought I could win it. It wasn’t until the last five kilometers that I actually started to think, ‘OK, maybe we could pull this off,’ and then we started hearing that Lauren was coming, and I was like ‘oh no, she’s gonna catch us,’ but we kept working together, and then in the last kilometer, I dug down as hard as I could to the line and hoped that I had enough of a gap to hold them off.”

After a mostly intact beginning, the peloton began to bust apart as the elevation increased on the 65.9 mile stage.

Doebel-Hickok, the Queen-of-the-Mountains leader, took maximum points on the first QOM and gained queen-of-the-mountains points on all opportunities thereafter, securing her polka-dot jersey.

At 20 miles into the race, Helen Gilbert-Snyder (Live Play Real Estate) launched a solo attack and stayed away for about 30 miles, putting three minutes and 15 seconds into the peloton.

“No one wanted to go into the headwind with me, so I did it myself for 30 miles, which was fun, and that’s what I’m good at – I can just put out the power on the flats for a long time,” Gilbert-Snyder said.

Back in the field, EF Education-TIBCO-SVB and CINCH Rise controlled the pace and eventually reeled Gilbert-Snyder back in at the base of the second queen-of-the-mountains climb.

But Marcolini and Killips gained 20 seconds on De Crescenzo and kept her at bay all the way to the line. Doebel-Hickok took fourth on the stage and Prieto fifth.

Doebel-Hickok, who was only 12 seconds away from taking the overall lead the day before, ended up exactly one minute behind De Crescenzo in the finale for the red jersey.

“We raced to try and win the overall, but we weren’t successful in that, but taking away the QOM jersey and second [on] GC and the way the team rode, we can be really happy and proud,” Doebel-Hickok said.

Out on the road, Ward hung onto her green Sprinter jersey and Barrera, who had a large lead on the Best Young Rider competition, kept the white jersey on her back.