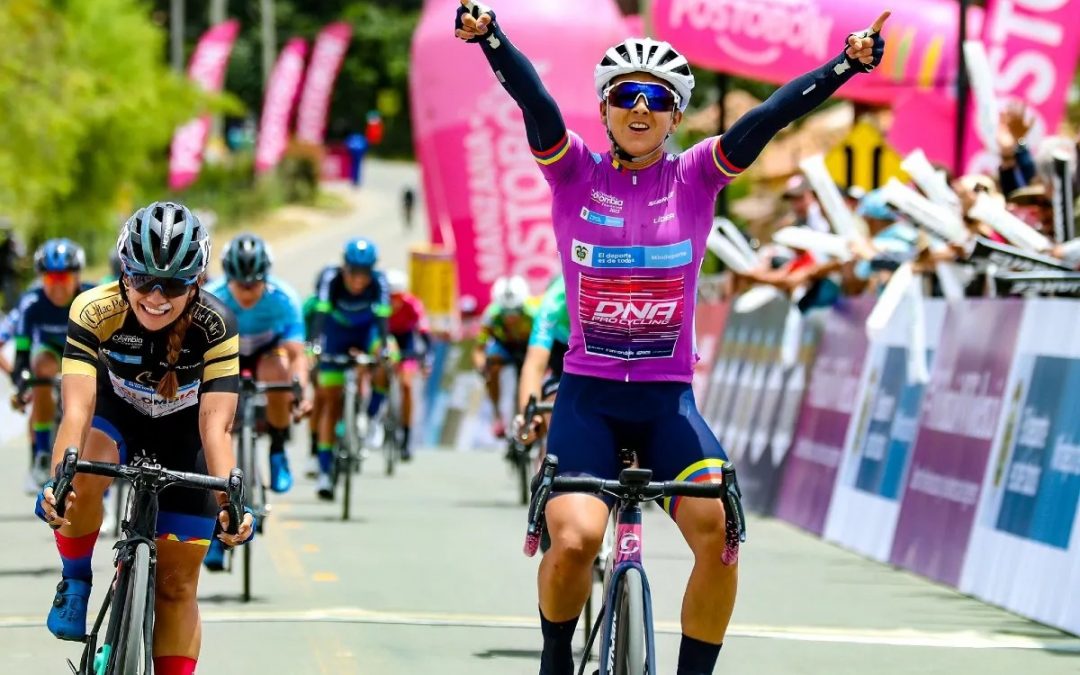 Again! Diana Peñuela (DNA Pro Cycling Team) won the second part of the 2022 Vuelta a Colombia Femenina, agreed on over 101.4 kilometers starting from Paipa and arriving in Villa de Leyva. The experienced cyclist from Manizales was the smartest and the strongest in the final sprint.

The national road champion is the absolute dominator of the race and for this opportunity, she returned to play with cold blood to beat her great rival, Lina Marcela Hernández (Colombia Tierra de Atletas GW Shimano), who was once again second in the pack ending, repeating the film of the first day.

In another fraction passed by rain, the day began with several falls in the peloton, which for the second consecutive day, was affected by the wet floor and extreme weather conditions.

The first special sprint went to Vanesa Martínez (Merquimia), who also took advantage of her good legs to go for second, beating the cyclist Katherin Montoya of Sistecrédito GW on both occasions. During much of the route there were some attacks from different cyclists, which made the competition more intense for the leader of the general.

Averaging kilometer 70, an escape of eight runners was formed, who took more than a minute out of the lot, however, in the last kilometers the group of favorites, in which the leader of the competition was traveling, caught up with the fugitives and prepared to define the victory to the packaging.

The closing of the day was quite accelerated with a reduced group of cyclists, where the leader took advantage of her top speed to finally get a wheel ahead of the second Marcela Hernández from Colombia Tierra de Atletas who is second in the general to 12 seconds.

In the third place in the general standings is the runner Carolina Vargas of the CM Team, 20 seconds away, so the competition still has a long way to go towards the end, and the possibility is open that more runners can join the dispute for the race.

In the final stretch, the DNA Pro Cycling once again showed off with a phenomenal job for Peñuela to respond with another victory, which ratified her leadership in the most important women’s cycling race in the country.

The third stage will take place between Chiquinquirá and Oiba over a 111.8 km route where Peñuela will once again seek to defend her jersey as the leader of the race against the Colombia Tierra de Atletas runners, who have more number of runners, Well, the DNA Pro Cycling arrived with 5 runners, while other squads arrived with 6 cyclists.

However, the experience of the Manizales runner and her companions have been decisive when it comes to finishing the first two stages, even so, they must establish the best possible strategy thinking about the mountain days where other teams would have better performance in story to gregarious.

The Vuelta a Colombia Femenina will end next Sunday, August 14 and the fight for the title still has a time trial, a circuit and some important mountain areas.