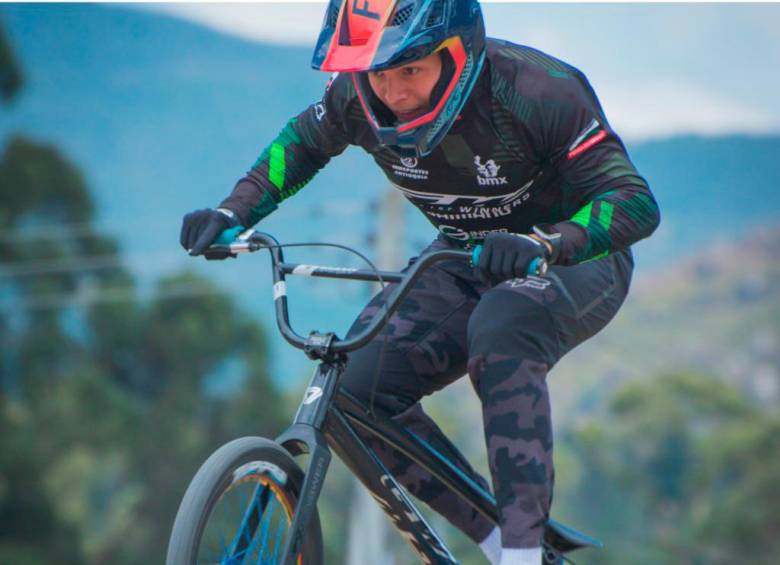 The recent champion of the BMX World Cup in Glasgow (Scotland) and gold medalist in the Bolivarian Games, Diego Arboleda, Girardota’s proud son, spoke with EL COLOMBIANO about his life, his family and his career. The man from Antioquia is one of the national pilots with the most projection in this sport and would be a Colombian card in the Paris-2024 Olympic Games.

“Homemade, son of a very devoted family. After graduating from high school, I dedicated myself to being a professional athlete, that’s me.”

How did you get into BMX?

“Since I was a child. I was four years old when a neighbor of my grandmother trained bicycling. One day he arrived with his helmet all sweaty and lent it to my brother (Juan Pablo), who is a year older than me. We started asking him what he was doing and we ended up on the track. The following Christmas, the Child Jesus brought each one of us a bicycle and from there it all started, I have already been on a bicycle for 20 years”.

Did his brother of his also continue in this sport?

“He ran world championships, he was second in the world, he was very good, but about four years ago he made the decision to retire from cycling to focus on his medical studies. He is almost graduating as a doctor from the U. of A. ”.

What does he mean to you?

“Unconditional support, he has always been there since I was little. We trained together, my challenge was to beat him. Since I was the youngest, I wanted to do better than him, jump first, come out better… When he made the decision to retire it was like starting over because he had no one to train with, he was already doing it alone and he had to change his mentality. My brother continues to be a fundamental support, as well as my family.”

“I tried to start studying Business Administration. I only did three semesters and I said: well, I want to do the Olympic cycle well, fully, so I stopped studying and focused on cycling. Now I am 100% dedicated to bicycling”.

Do you plan to take it back?

“In the future, yes, because I don’t see myself doing this for many more years. When I finish my sports cycle I will take life as an ordinary person, resume my studies and start doing business”.

Some say that he likes the media a little…

“It’s not that I don’t like them, but sometimes I don’t feel comfortable talking. But I value the work they do because they allow the sport to grow more, more sponsors to emerge and become interested in one. Sometimes I don’t have the time, I don’t coordinate very well”.

How do you assimilate so many achievements at 25 years old?

“I am proud to fulfill my dreams, because I have been working for that for many years. It takes a lot of discipline, dedication, and the results are gratifying. One realizes that it is worth fighting and moving forward. Although I still have many goals.”

How is his other family nucleus made up?

“I have a sister (Laura) who lives in the US. I live with my dad (Jaime) and my mom (Sandra). My father has been my pillar, my biggest sponsor, the one who has given everything so that I can be an athlete despite everything, because sometimes the family, the uncles and everyone say that I should study. But my dad tells them: he has to do what he likes the most. And my mom is the one who pampers me and takes care of me, the one who cares about me. She is not even interested in how the athlete is doing and she cares about Diego, he is my ground pole”.

Is it entrusted to the Virgin prior to a race?

“Yes, my whole family is devoted to the Virgin, my parents are very religious and they instilled that in us from a young age, they taught us to believe in God and always do things hand in hand with him. Before leaving, at the gate, I give myself two blessings and do a ritual that I have. I always entrust myself to God before the race and I thank him after it”.

What else does he include in those rituals?

“I prefer to keep it in reserve. When I retired I tell you everything, there are a couple of things that I must not reveal for now. I pay attention to the way I climb the stairs towards the gate, I put on the left shoe first than the right, a lot of things that one starts doing unconsciously and then they become a routine. So if something like that went well for me, why not repeat it?

Do you feel that God has given you some miracle?

“Yes because I had a femur fracture and I broke my hip. The doctors didn’t give a damn about me and told me to forget about bicycling, even to walk again. So for me it was a miracle to return to enjoy the sport that I like so much, to win those titles after they told me I couldn’t”.