Egan Bernal on Twitter: “confident that everything will turn out well” 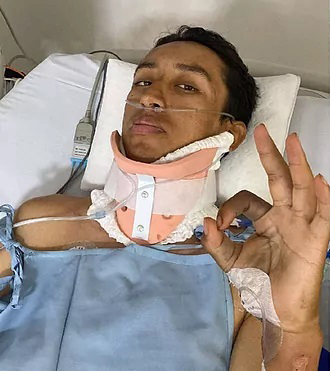 Egan Bernal has reappeared. After his very serious accident while training on the roads of Cundinamarca, an area near Bogotá, the ‘Zipaquirá Condor’ has published a personal tweet in which he thanked all the doctors and colleagues for their work, in addition to pointing out the danger of the accident. It should be remembered that the Ineos man hit a bus.

“After having a 95% chance of becoming a paraplegic and almost losing my life doing what I like to do the most. Today I want to thank God, the Clínica Universidad de La Sabana, all its specialists for doing the impossible, to my family… for their wishes. I’m still in the ICU waiting for more surgeries but trusting in God everything will be fine, “he said on Twitter.

Bernal, who had to undergo surgery for all the injuries caused, has admitted that he will have to undergo surgery on more occasions. Something that will further delay the recovery process of him. Throughout the day, Bernal had once again made the news when an image of his hand holding his mother’s was published. Strong and significant image.

In addition, on his Instagram he has published a very harsh photograph of his current state. In a bed, full of wounds and bandages. But with the ‘ok’ gesture, something hopeful for an admirable cyclist who is going through difficult times.

The accident while training with the time trial ‘goat’ left Bernal with a series of serious consequences. Pneumothorax, patella fracture, femur and two vertebrae. In addition, six more vertebrae were intervened in the operation. Subsequently, he has gone through the operating room again and his hand and face were intervened.

As MARCA published during the event, it is frankly difficult to estimate how long the recovery process will last. The objective of the ‘Condor’ must be to recover 100% to carry out his normal life, competing is in the background.