Egan Bernal returns to competition at the Tour of Denmark 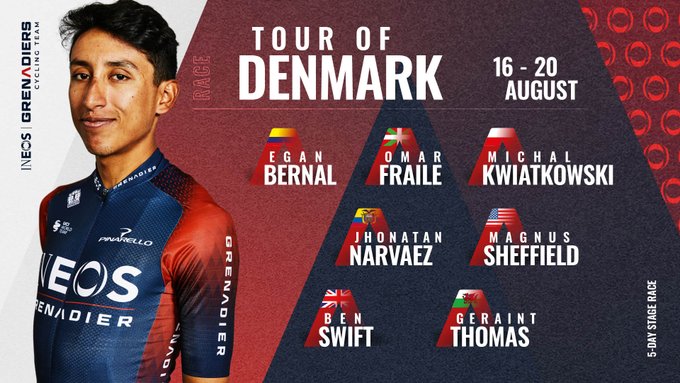 The 2019 Tour de France and 2021 Giro d’Italia champion Egan Bernal will compete again in the Tour of Denmark on Tuesday, August 16, eight months after his serious accident while training in Colombia.

“Egan Bernal has made remarkable progress in recent months to return to racing with the team, testament to the cyclist’s focus and dedication, the rigorous efforts of his medical team and the many who have supported him throughout his recovery process. return to high competition”, ”, indicated the INEOS Grenadiers team in an official statement.

Further on, it specifies: “After an evaluation this past weekend, the Team INEOS Grenadiers medical team authorized the Colombian to return to compete from this very Tuesday, being part of the INEOS Grenadiers line-up at the Tour of Denmark.”

On his part, owner Egan pointed out: “After what happened to me in January, the moment I was waiting for finally arrived. The one to compete again with my teammates. I cannot express how difficult the last eight months have been for me, both physically and mentally. That day and the journey I have undertaken since then will be a part of me forever, it is something I will never forget.”

“Just as I will not be able to forget the support I have received from my family, my girlfriend, the INEOS team and my fans. As human beings, we truly trust each other in our times of need, and this year has been a time of need for me. I can’t thank everyone who has been there for me enough. That support has been invaluable in motivating me every day to work very hard to be able to compete again. To all of you, a sincere thank you.” Egan concluded.

“When you think about where Egan was just eight months ago, it’s amazing the progress he’s made. He has shown the world the true strength of his character and has shown remarkable courage to get himself competitive again. We are still in a process with By Sergio Urrego