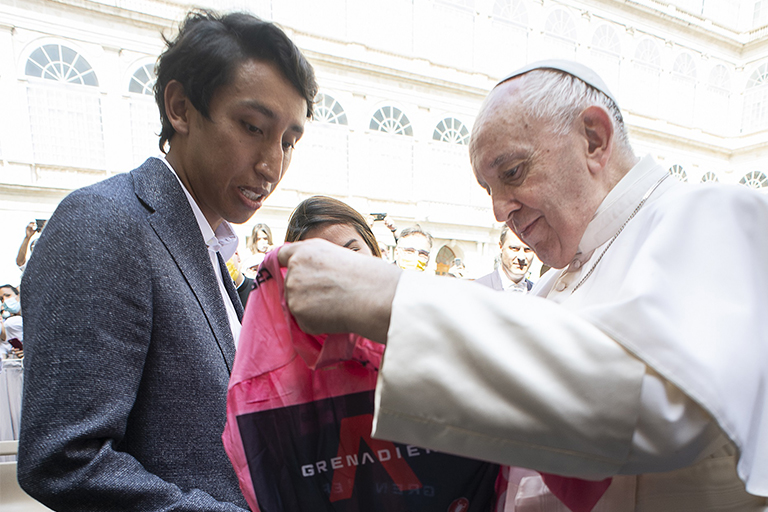 Egan Bernal was received today by Pope Francis after Wednesday’s General Audience held in the Patio de San Dámaso. The Colombian champion gave him as a gift a racing bicycle with the colors of the Argentine flag and his champion jersey. Francisco, with his humor, joked with the 2021 Tour of Italy champion: “Egan, how many reds (coffees) do you drink before a race?”

The cyclist dreamed of visiting Pope Francis; the idol of him outside the field of competitions. Every time he rides a bicycle he has a habit of crossing himself. To his mother, Flor Marina, he dedicated his victory in Milan and, through a moving phone call, asked her for her blessing after lifting the Cup. Faith, tenacity and talent have accompanied Egan, 24 years old , in his sporting feats.

“I have had several special experiences in my life, but this is unique, the most beautiful experience I have had in my life. My family is Catholic, I am Catholic, and I did not expect it that way. Feeling his presence at this moment was beautiful, ”Egan shared at a press conference with journalists after the audience with the Pope.

Egan took the opportunity to ask the Pope for a special blessing for all Colombians at this time when the country needs it because of the social problems it is going through and within the framework of the temporary suspension of the mobilizations after almost 50 days, without that implies the end of the demonstrations.

Egan, who was accompanied by his girlfriend María Fernanda Gutiérrez, said that this audience was also a “spiritual” occasion to reflect on his growth as a person. Now, he aspires to make the triple of accolades by competing in the Vuelta de España. “The triple crown, it would be a dream.”

He confessed to the press that he prays and entrusts everything to God before facing an important stage or career, even if he is not devoted to a particular saint.

Egan Bernal was born in the city of Bogotá on January 13, 1997, but his childhood was spent in a municipality near the country’s capital, Zipaquirá – Cundinamarca, the land of his parents.

From a very young age and following the example of his father, Germán, who also practiced cycling, Egan began to feel empathy for this discipline, practicing it professionally from 2011, when he started mountain races.

Three years later, in 2014, the young man from Cundinamarca managed to win his first mountain biking world title, a record that he repeated the following year.