Emiliano Contreras is the new champion of the continental route 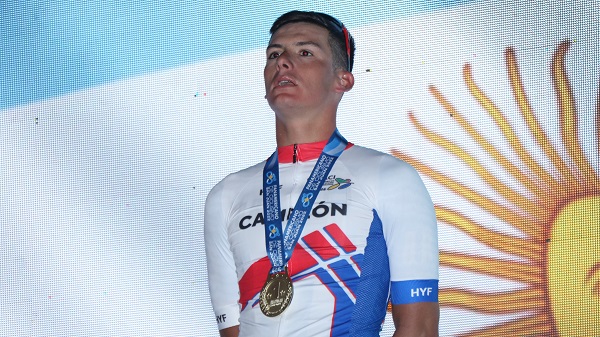 Emiliano Contreras, from San Juan, who premiered the title of Argentine champion just a month ago, became Pan American Champion in the Elite category road race, which served as a competitive closure to the fair held until this Sunday in San Juan, Argentina with the participation of 27 nations.

Emiliano Contreras defined the competition in a heart-stopping sprint, breaking Sebastián Novoa (ECU) on the sentencing line. While Uruguay added another bronze from the hand of Sixto Nievas. The Argentine stopped the clocks in 4h 33m 31s to complete the 194.5 kilometers, on the last day of the contest.

The escape of 9 men that was born after 20 kilometers of the race, was sustained until the checkered flag. In that lot, José Luis Rodríguez, the trans-Andean specialist in definitions, traveled, so the proposal should not be ruled out. Back, the reaction was late, because time was not enough in the effort to connect.

Emiliano Contreras, received the order to save himself, collaborated, but did not spend more, reduced the attacks and defined as the gods to get into the big story, crowning an unparalleled season. This time there were 84 applicants for the continental title, who had to flatten just over 180 kilometers, traveling through Albardón, Chimbas, Rivadavia, Ullúm and Zonda, with three passes through the Punta Negra Dam, the most demanding section of western Ullunero, where bet an excellent frame of public.

Among the candidates, the teams that defend themselves in the climb appeared, such as Colombia, Venezuela and Ecuador, to which were added those of Chile and Argentina, which defended the locality.

In the first 50 kilometers, nobody took care of ordering the chase in the group, since the teams that could take responsibility had at least one representative at the top.

There were not many variants in the vanguard, who formed a round staircase waiting for the order for reinforcements to arrive from the bottom. Although there were about 50 kilometers left before the flag descent, the continental championship was divided among about 15 riders, because the hitch was planned in the albardonero section, to give time to resolve any counterattack in the final kilometers.

In full pursuit of the first section of Route 40, Durán and Rosas did a fine job, sheltering Nicolás Tivani, while the Venezuelans Linares and Aular pressed the accelerator to end the escape, which was well used by Ferreyra (BRA), Gómez (VEN) and Colón (COL) to enter the conversation.

Knowing the terrain and launching all the roll, the Argentine Emiliano Contreras took the momentum in the main straight for the triumphant arrival, fighting the arm wrestling against Sebastián Novoa (ECU) and winning by the minimum difference.

A title for the albiceleste that put the bow on the international competition, because now, the man from San Juan matches the story of two riders from Bella Vista, Eduardo Trillini (1980), in Santiago de Chile, and that of Maximiliano Richeze, a decade ago in Sea of ​​the Silver. Emiliano Contreras flew low, to take over the gold medal that today puts him at the top of the continent.

“Many things go through my head and few words to describe what I feel, not only for me, but for all the people who were on the side of the road supporting us. In the end, I knew that the Ecuadorian had the same chances as me, since we had been in the breakaway and I knew that it was going to be a hard-fought sprint because he is a good sprinter and I beat him by the semi pipe. We were able to save our legs, we climbed the Punta Negra dam three times, we ate and hydrated throughout the race and that was an important detail at the time of definition”.