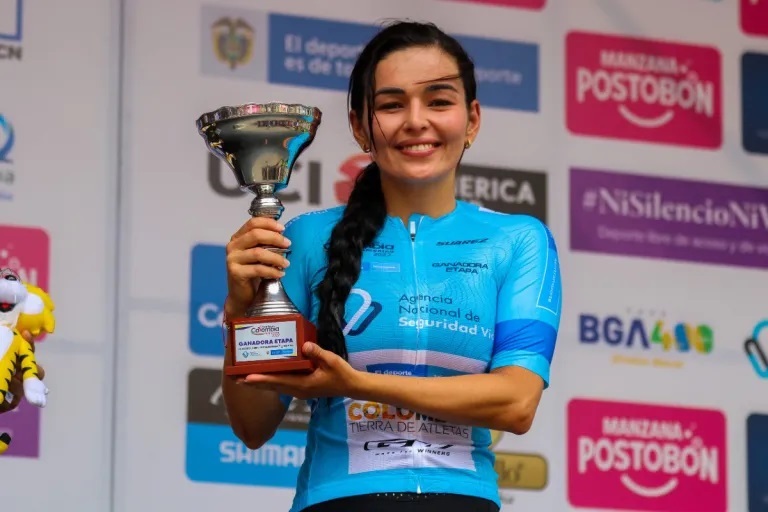 In a great display, Estefanía Herrera, from Colombia Tierra de Atletas GW Shimano, won the fifth stage of the Women’s Tour of Colombia 2022, which was held between Curiti and Bucaramanga over 103.4 kilometers. Diana Peñuela (DNA Pro Cycling) kept the lead with the final day to go.

The runner from Antioquia managed to reach the finish line alone, after a devastating attack before entering the capital of Santander, breaking the winning streak of Peñuela, who dominated the first four quarters.

The group of favorites entered more than a minute behind the winner, in which Lina Marcela Hernández, second overall, did not waste her speed to enter the 2nd position, Third came Carolina Vargas (CM Team), while the leader had to settle for fourth place.

The day, which was accompanied by a pleasant climate, was characterized by the multiple attacks caused by the members of the Colombia Land of Athletes GW Shimano, who tried it with Ana Cristina Sanabria, Tatiana Ducuara and Lina Marcela Hernández, however, the national champion The route was strong for much of the route and with the Mexican Anet Barrera they managed to defend themselves successfully.

In addition to being the leader of the general classification, Diana Peñuela is at the forefront of the sections by points (65) and sprints (11), while Ana Cristina Sanabria commands the mountain with 17 units and Carolina Vargas is the first among the runners sub 23. By teams, Colombia Land of Athletes GW Shimano is a leader with an already unattainable difference.

This Sunday the sixth and last stage of the Colombian round will take place with a circuit of 90.3 kilometers in the city of Bucaramanga, which will have seven laps of 12.9 km.