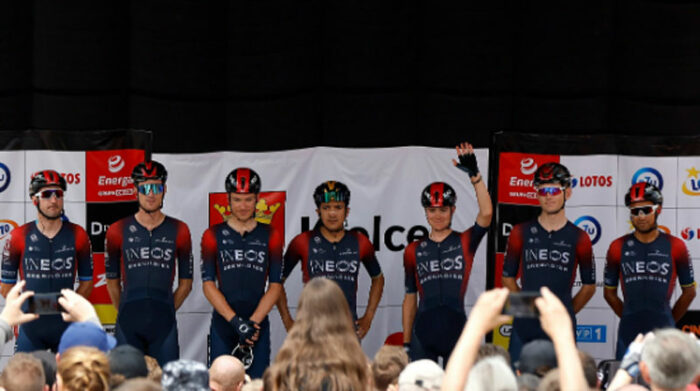 The British rider from the Ineos Grenadiers took first place in the general classification, after the victory of Arnaud Demare in the seventh stage of the 79th Tour of Poland, where the best placed Latin American was the Colombian Sergio Higuita with an eighth place, while the Ecuadorian Richard Carapaz anchored in 22nd place.

Ethay Hayter, 23, captured his first title in a World Tour stage race and second of the season, after winning the individual time trial national champion in June. The Ineos Grenadiers cyclist had no problem reaffirming his leadership in the last stage and finished with a cumulative time of 28 hours, 26 minutes and 23 seconds.

Hayter rose to first place overall in Poland in the sixth stage time trial, where he took an 11-second lead over Dutchman Thymen Arensman, second in the individual general standings, while third place was reserved for Spaniard Pello Bilbao .

The best South American in the competition was Colombian Sergio Higuita, who finished eighth; while the Olympic champion, Richard Carapaz finished in 22nd place overall, 1:12 behind the winner. Other Latin Americans, Jefferson Cepeda was ranked 35th, at 2:31, and Jhonatan Narváez finished in 50th position.

In the case of Carapaz, he lost time in the sixth stage of the Tour of Poland, an individual time trial in which ‘Richie’ finished in box 32, 1:20 minutes behind the winner, Thymen Arensman, of Team DSM (17:40 minutes )

In this way the ‘Locomotive of Carchi’ also left the ‘top ten’ of the general and fell 16 positions. Richard Carapaz, from the Ineos Grenadiers, competed with a jersey with the Ecuadorian flag. He did it this way because ‘Richie’ is the current national time trial champion.