Fabio Duarte, champion for the second time of his Tour of Colombia 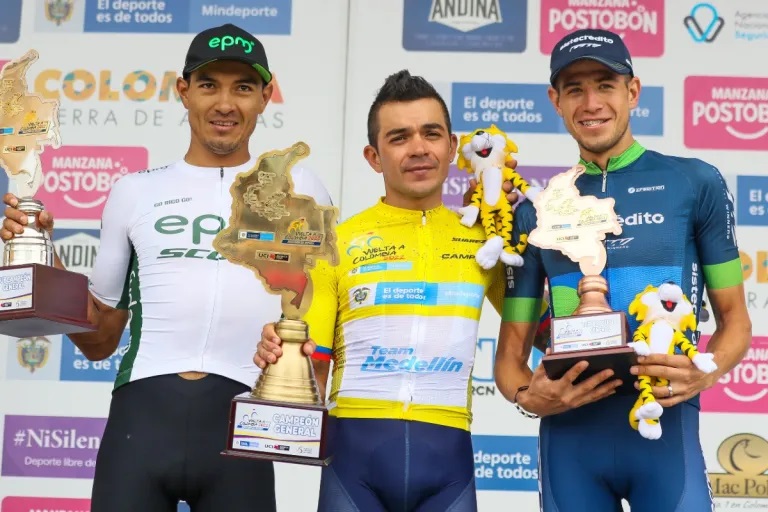 Rodrigo Contreras (EPM-Scott GO RIGO GO) did not disappoint his followers and won the final 41.9-kilometer time trial in Tunja of the Vuelta a Colombia 2022, which was won for the second time by the host Fabio Duarte (Team Medellín EPM), which finished second in the day in another excellent demonstration.

The last fraction that dismissed the 72nd edition of the Colombian round, was in the hands of the rider from Villapinzón, who won the day riding at an average speed of 41.1 km/h. to prevail with a time of 1 hour, 1 minute and 3 seconds. Three men from Team Medellín EPM followed: Fabio Duarte at 1:12 minutes difference, Bryan Sánchez at 1:54″ and Óscar Sevilla at 2:24″.

Duarte, an experienced 36-year-old rider, seized the lead after achieving an incredible comeback in the eighth stage, valid to keep the yellow jersey.

The U-23 road world champion in 2008 was escorted to the individual general podium by Hernando Bohórquez (Epm-Scott GO RIGO GO) at 5:02”, while Julián Cardona (Sistecredito-GW) finished third at 6 :13” by Duarte.

Fabio Duarte, who succeeded José Tito Hernández from Antioquia, repeated the title won in 2019, adding another victory to his rich track record to the trilogy of the Clásico RCN, Vuelta a Colombia and Vuelta de la Juventud.

The Ministry of Sports and the Colombian Cycling Federation, organizing entities of this competition, reported that the prizes for the 72nd edition of the race have a cumulative value of $124,200,000, which is equivalent to just under 30,000 euros, distributed by stages. , final general classification and other classifications such as mountain, points, sprint and teams, among others.

How much money does Duarte take for the title?

Duarte, as leader of the general classification, receives an economic prize of 13 million pesos, which is equivalent to just over 3,000 euros. The income obtained in this competition for the champion will be greater, since the cyclists earn from $2,200,000 to $100,000 for entering the top 20 of each stage.

Although he suffered in the individual time trial, being overtaken on the road by Duarte, Hernando Bohórquez of EPM-Scott kept second place overall at 5’02” for which he won a prize of $6,000,000, while Julián Cardona ( Sistecredito-GW) who closed the podium at 6’13” receives $3,000,000.