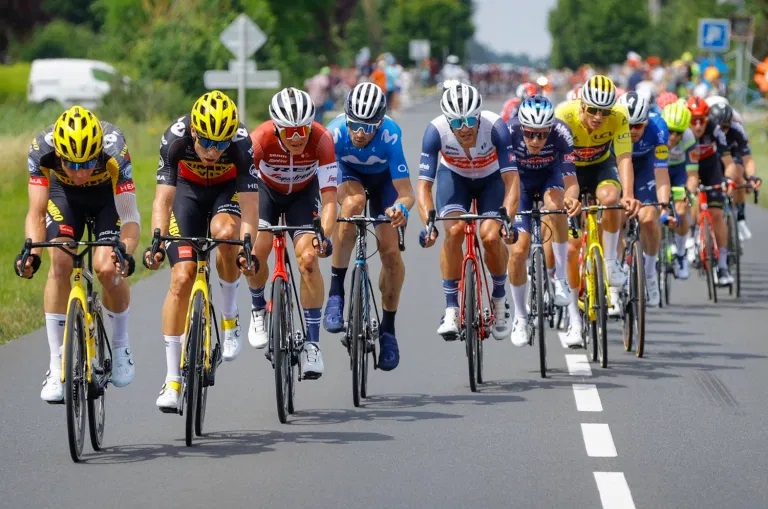 In a day of great intensity, in which the high pace, the viability of the strategies and the strength of the teams prevailed, Matej Mohoric (Bahrain Victorious) took the victory this Friday in the seventh stage of the Tour de France, while the main letters of America: Rigoberto Durán and Richard Carapaz fell a couple of seats in the individual general.

The stage, contested between Vierzon and Le Creusot over a distance of 249 kilometers, was a true and impressive battle until Mohoric launched himself for the victory in the final fifteen kilometers and found a reward for his remarkable combativeness when he surpassed by a wide margin of 1 minute 20 seconds to Jasper Stuyven (Trek Segafredo) and by 1 minute 40 seconds to Magnus Cort (EF Education-Nippo) who was third.

The battle between the men of the general began 16 kilometers from the arrival, before the delay of Primoz Roglic (Jumbo Visma), who could not keep up with the rhythm of the small main group, which led to a great acceleration of INEOS Grenadiers in the penultimate climb of the day, where Richard Carapaz decided to launch a brutal attack on the final 13 kilometers, without finding a response from his rivals, beyond the pursuit led by Sergio Higuita, along with the men of the Movistar Team.

39 kilometers from the arrival, the Colombian Nairo Quintana (Arkea Samsic) also dropped from the main group that was already running at a high pace and in which only a small number of runners remained, given the notable acceleration of Total Energies.

All of the above was reflected in the individual general classification, which is still dominated by Mathieu van der Poel, who widened the differences over his rivals except for Wout van Aert who remains second at thirty seconds. Rigoberto Urán (EF Education Nippo) now occupies the tenth position at 5 minutes 4 seconds, while the Ecuadorian Carapaz fell to 12 at 5:19. The third best-placed Latino is Colombian Sergio Higuita (EF Education Nippo) at rung 23.

Five mountain difficulties presents the eighth fraction of the Tour to be held this Saturday, starting in Oyonnax, a 150-kilometer day passing through a third-class pass, a fourth-class pass and three more first-class pass, before the arrival at Le Grand-Bornand.