Fernando Gaviria, third in the first stage of the Saudi Tour 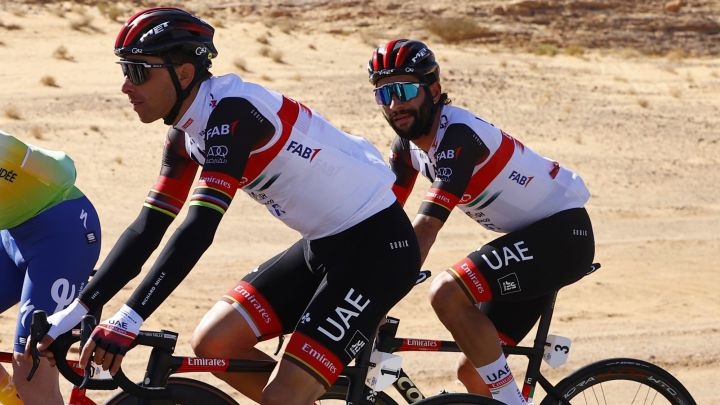 2022 began for Fernando Gaviria. The Colombian cyclist from the UAE Team Emirates finished the first stage of the Saudi Tour in third place, behind the Australian Caleb Ewan and the Latvian Martin Laas. The route was 198 kilometers, the longest of the race, which started and finished in the Winter Park of the city of Al-Ula, Saudi Arabia.

Ewan’s team, Lotto Soudal, did a great job closing the gap with the riders who staged the breakaway: Norwegian Martin Urianstad (Uno-X Pro Cycling), Malaysian Mohd Shahrul Mat Amin (Terengganu Polygon) and Greek Polychronis Tzortzakis (Kuwait). These were hunted down 25km from the finish and managed to get the day’s winner into a great position for the final pack.

The Australian finished with a time of 4:41:42 and has an advantage of four seconds with Laas and six with Gaviria. He will look to defend the leader’s jersey this Wednesday, when the second stage of the race between Taibah University and Abu Rakah takes place. The fraction will have a route of 163.9 kilometers and will have a 9% slope in the last 1.7 km to test the runners.

This is the second edition of the Saudi Tour that will run until February 5. The race resumed this year after being postponed in 2021 due to the coronavirus pandemic. In its first edition, the German Phil Bauhaus of Team Bahrain Victorious was the champion.

Fernando Gaviria and Santiago Buitrago are the two Colombian cyclists present in this race in Asian territory. Buitrago, who represents Bahrain – Victorius, joined the peloton with the same time as the winner, but passed the finish line in 37th place.

This is the first competition in 2022 for both riders. In the case of Fernando, his goal will be to return to celebrating the sprint in one of the three big races of the year, while Santiago seeks to consolidate himself in the highest category of cycling.